In Case You Missed It: White Widows Pact - Self Titled 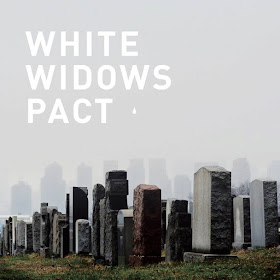 Alright kids, you know I love the slow and low as much as anyone, but there comes a time when you just gotta strap on your shit-kickin’ boots, pick up the pace and let loose the dogs of war. Now don’t get me wrong, you’re not likely to see me in the pit doing windmill kicks or pickin’ up change anytime soon. I’m just saying that now and again, there’s nothing wrong with mixing a little hardcore into your daily dose of the heavy. So with that, I’d like to offer you a taste of something a bit different than my usual prescription of frenetic fuzz or lethargic doom. This week’s volume of “In Case You Missed It” is a rousing debut EP from Brooklyn’s latest addition to the New York hardcore scene. So from the pages of Heavy Planet to your ringing ears, allow me to introduce White Widows Pact (formerly…and briefly…known as White Widows).

Roaring out of the gates like a pissed off rodeo bull saddled with the world's biggest asshole, these guys pull no punches…not one. In fact, the bludgeoning riffs from guitarists Travis Bacon (Grudges) and Nick Emde (The Destro) and the raw throated howl of vocalist David Castillo (Primitive Weapons) on the opening track "Ace Rothstein" (nice Casino reference fellas) will undoubtedly give you an idea within the first 30 seconds whether or not this is gonna be your bag. And if it's not…well hey bud, I'll see you next week. But if it is…how's about you go ahead and check out "El Marrano" (Spanish for "the pig") where White Widows Pact continue their onslaught, only letting up somewhat during an interesting de la Rocha style interlude that flows into a sick guitar solo and more throat shredding from Castillo.

But "Slow Burn" has to be my pick of this litter if you're just looking to dabble in the insanity. Like listening to Madball on downers, or in other words, early Crowbar, this bit of filth could easily find a home over at Seth's Sunday Sludge. And I guess now's as good a time as any to mention the band's rhythm section of bassist Brian Ponto and drummer Kenny Appell (Goes Cube, CleanTeeth) who carry this chaos like a cross. Just give a listen to "New Pollution Group," which is quite simply brutality with a beat. "Sin Taxes" (another fave) carries some semblance of melody…barely…with its combination of air raid guitars, a la early Sepultura, visceral vocals…"the ringing in my ears, sings me the songs"…and steady, militaristic percussion. And then this self-titled EP is over as quickly as it began with "Collateral Damage," an aural bruiser that brings to mind other NYC stalwarts like Merauder and Pro-Pain with its harsh vocals, grinding guitars and relentless groove.

Look, I make no bones about it, this ain't pretty music. Hell, my understanding is that the band's name is taken from an Italian group of widows (Vedove Bianche) whose husbands committed suicide due to the economic crisis in Europe. But sometimes discontent breeds inspiration and in inspiration lies true, unbridled expression. This is the sound of the White Widows Pact. Join their plight…I guarantee, you will be pummeled.