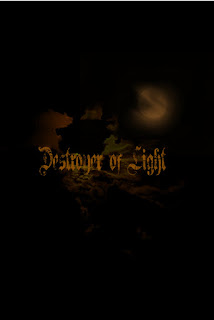 When I lived in Toledo, Ohio, I rested my head fewer than fifty paces from a vinyl shop- RamaLama Records. I could wake up, roll out of bed, and get into that  record store before my hangover kicked in. It was glorious. I was spoiled. Then I moved to Kalamazoo, Michigan, and my vinyl connection melted into the proverbial sunset.

But, before I escaped from the Buckeye State I scoured apartments in the Zoo, looking for a shack close to a record store. I couldn't  find any places as close as I'd become accustomed to, but I did find a decent shop, and when I walked in and bought Trouble's Run to the Light the manager talked to me for thirty minutes. I'd found my home away from home. My third place.

That store is Greenlight Records, and the manger is Chris, and during one of our frequent conversations he suggested I give a listen to a band of Kalamazoo expats who now dwell in Austin. Destroyer of Light.
Destroyer of Light play heavy doom with a hint of death. They boast mostly clean vocals with a smattering of bowel shaking death growls that are used to season the tunes. These extreme vocals work amazingly well when paired with the at times Messiah Marcolin like clean vocals that are the norm on the album .

The album kicks off with the "single", or at least the tune a video was made for, Greet Death and it is a great summation of what this band is all about- heavy doom riffing, creepy clean vocals, and scare your dog death growls. A helluva way to kick things off. Next up is The Virgin, a Rosemary's Baby tale about giving birth to Satan. The tune starts out with feedback and builds and builds to a funeral stomp with cough syrup vocals that drip slow and clean. A chorus works its way between the riffs, then more of those codeine calls before the death growls pop up to remind you how evil this ditty is, least you'd forgotten. The tune ends with the whole coven coming down to the studio to sing back up on the chorus. Cool. So Divided could start a whole new genre: protest doom. Current and eternal evils are discussed and I'm reminded of all those great message songs Sabbath put out so many years ago. Coffin Hunter rises next, and you can guess what this tune is all about. There is a solo buried in the mix around three minutes and forty seconds in that's worth checking out, it tries and tries to rise above the sludgy dirge but is soon silenced by death growls. The album ends with Asteroid and I've included a live clip here so I'll spare you my stuttering description. Destroyer of Light are collecting funds to put out some vinyl, so visit their Bandcamp page- if you're so inclined.