In Case You Missed It: Propane Propane - Indigo 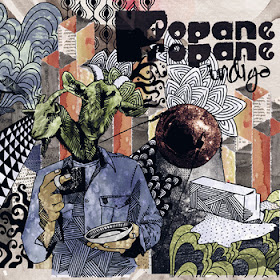 I still remember when I first heard the spaced out heaviness of Propane Propane. It was early 2011, and this trio (now a four piece) were well on their way to securing a spot in the final four of our inaugural March Bandness tournament, thanks of course to the voting of you, the Heavy Planet readers. Now that's quite a feat for a band from a small, southern town in Sweden, especially considering that there were 63 other bands involved in our competition. So where are they now and what have they been up to?

Well it turns out, a lot has happened to Propane Propane in the two years since we last heard from them. For starters, they recorded their phenomenal debut LP, Indigo, only to have it shelved for a year due to personal issues with their label. Not sitting on their asses for even a second, the band added a second guitarist (Rickard Swahn who is not heard on Indigo) to their already powerful lineup and then established the ultra-cool concept of an online, continuously updated b-sides and rarities compilation which you can check out for free right here. Then in 2012, retooled, reinvigorated and revived, Propane Propane signed on with a new label and finally released Indigo for all to hear. And somehow, we fucking missed it…

Now listen, you know the drill…I'm about to break this thing down and tell you all the cool shit that I like about Indigo. But before I do, let me just spell this out for you real quick. I want you to scroll down to the bottom of this review and take a quick listen to the opening track "Rise", because here's the deal. If you like that track, I can guarantee with certainty that you're gonna love this band and you're gonna dig this entire album. So go on, give it a listen and then meet me right back here. And if for some batshit crazy reason you don't happen to like the song…well…I recommend you grab your things and get the fuck outta here because I'll just be wasting your time.

Cool…I figured you'd be back. As you just heard, Indigo fades in with feedback and effects, rolls into a roaring riff alongside deafening crashes and then takes hold for eternity with one of the catchiest space rock guitar parts this side of "Negasonic Teenage Warhead". Benjamin Thörnblom's vocals come through like the deep chested bellow of Neil Fallon as heard through Scott Weiland's megaphone, and Propane Propane are cruising through the cosmos, baby. "Kometh" slows it up and funks it up, at least briefly, before becoming the crawling colossus that it is. Pay attention to drummer Jakob Gill as he batters his percussive beats while the tune evolves into a full on playground for Thörnblom to demonstrate his guitar work before devolving into a wash of white noise.

The pace…and the stakes…are raised on "ANT", which is like psychedelic, stoner rock candy. Here the vocals take on a much more aggressive demeanor, at times sounding as if Thörnblom may shred every vocal chord in his throat. Who pissed this guy off? The song's crunchy guitar and pummeling rhythm section make "Cosmic Hideout" seem like a reprieve as it opens with a gentle beat and an even gentler harmony. But you and I both know that can't last and it doesn't. The song eventually explodes into another titanic, acid eaten groove that will fill your head full of fuzz like a bulbous, bristling balloon. And then comes "Truth", which couldn't be more aptly titled, because it is the song that validates Propane Propane. Opening with Truckfighters inspired desert "rock", this one morphs into desert "metal" in a hurry thanks to its belligerent riffs and ghastly guest vocals from Kongh's David Johansson. But don't get so caught up in the circle pit that you don't appreciate the smooth plucking mid-song from Thörnblom as if to say "hey bud…don't harsh my buzz."

"Aquatic" is an atmospheric instrumental that builds on subtle guitar play by layering bombastic drums with plenty of feedback and Niklas Andersson's dynamic bass. And then Propane Propane launch right back into the heart of intensity with "Return of the Burning Son", a song with a bluesy backbone and heavy demeanor, not unlike something you might have heard on Clutch's Blast Tyrant. And that vibe continues right on into "Food of the Gods", a lumbering epic that incorporates the effects laden psychedelia from the album's first half with that same bluesy groove, ultimately resulting in a jam fit for the halls of Valhalla. Then Propane Propane bring this behemoth to a close with their twelve minute title track, which starts off like a sort of instrumental ode to all of their previously acknowledged influences, but quickly transitions into an ambient bit of drone and noise that encompasses at least two thirds of the track's run time.

I gotta tell you, after hearing these guys two years ago, I never really doubted that this was a band to keep an eye on, but I suppose I didn't quite expect the ass kicking that is Indigo. Combining equal parts stoner laced fuzz with acid soaked space rock and throwing ambiance and a sense of the abstract in for good measure, Propane Propane have crafted a monster of an album. This one is as ripe in it's depth of sound as is the hue for which it is named. If you miss out on this, consider your ears dull…achromatic…colorless…and consider yourself an asshole. So go check it out.