The musical fare for the day is bone crushing, thought provoking, escapist metal too heavy to lift and too pungent to escape as it smolders and churns with the power and peril of a dozen uranium cores, with an unstoppable force that pulsates through to the deepest core of your being, burning an indelible pattern on your DNA that may ultimately mutate the musical, metal fibers of your psychedelic stoner soul. 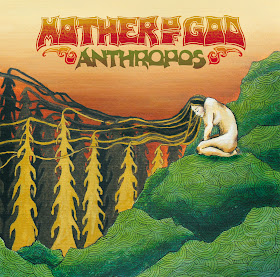 Small Stone Records is unarguably THE premier label for what I consider true rock, rock that gets labeled as stoner, fuzz, psychedelic, doom, or high desert depending on various aspects of the music itself. This type of rock hearkens back to the great music of the seventies as well as incorporates qualities of the music played by Kyuss in the nineties or Dozer in the double aughts, or a dozen other great bands and sounds in and around those eras. Small Stone does a great job of signing bands and artists that have an extreme aptitude toward true rock, and they have often gone to the ends of the earth to find them. This is very similar to Heavy Planet in that regard, presenting music to the habitues of these great musical styles hailing from far and near. Today Small Stone and Heavy Planet collaborate a bit, with Small Stone having done almost all of the work, by presenting an honest to god, sublime kick ass rock and roll band, Mother of God.

Mother of God hails from Morgardshammar, Sweden with bandmembers:

Their music is at the same time as familiar as flannel and as fresh and new as Swedish mountain snow. They incorporate all the great elements of true rock, with gargantuan instrumentation from all members, while crafting songs that immediately and clearly make their mark upon an exceptional and enjoyable style. Two qualities among many exceptional traits they possess that places them immediately upon the shelf for album of the year consideration is, 1) the singularity of the songs and, 2) Nygren's vocals. I've said it before and I'll probably say it ad nauseum in perpetuity, gifted vocals are a true rarity not just in the underground rock world in which we frequent worldwide, but in all of rock and roll in general. There are a lot of really good singers, there are plenty of really bad ones, and there are a whole bushel basket full of singers we love who are simply part of the experience of a particular group, but perhaps aren't quite gifted in the vocal department. And yes, it's often a matter of taste or preference, but when you are enjoying the music of this album, "Anthropopos", over and over again take time to reflect  on the vocals and tell me what you think of the role his gifted, sonorous instrument had to play in this unimaginably fantastic album of instant true rock classics. Another rarity in music, rock and otherwise, is the ability to craft a song this is more than just above average, songs that have melody and fun and singability and soul searing heat. Mother of God's music, on each song, is superbly crafted by masters of their art, without a doubt. What's even better is that no two songs sound similar in structure, only similar in delivery, with the same athletically gifted vocals carried along on a magic carpet of huge, low tuned, and loudly boomed guitars that quickly convert into keenly cutting laser beams that sear through their solos with surgical precision and power. The bass is equally powerful and agile, distributing two ton kegs of dynamite delivery while the drums make their presence felt in all planes through which the music must flow, simultaneously punching quick and true while landing haymakers on top of uppercuts on top of one two hook deliveries.

The opening track, "230", easily fits into the stoner rock classification with a huge, powerfully down tuned guitar that delivers a constant and beautiful hook reminiscent of Dozer, while creating an instant rock classic with their fresh approach. Track two, "Graenslandet", executes a tight tempo and huge guitars, while accentuating the vocals as a major instrument of delivery. Track four, "Aim For the Sun" is a psychedelic odyssey where Kvastergard and Nygren get to stretch and bend their guitars around a bit while Lindblad and Hurtig get to showcase their power and skill at the forefront of this song's haunting, mind bending journey. Track 9 is a clear demonstration of their strong song writing skills. Titled "Something From Below", it too is haunting and psychedelic in nature, but takes a different trip on a different boat down a darker river than did "Aim For the Sun". This songs exudes thinly restrained power from inception to final delivery, eschewing tempo for atmosphere, and demonstrating an almost seething ability in its conveyance of  dynamic, true to roots rock.

"Anthropos" should immediately be placed into the Heavy Planet lotto barrel for possible selection as album of the year due to its high quality collection of superb music. Mother of God delivers a highly refreshing, energy packed set of power ballads, psychedelic odysseys, and instant stoner classics punctuated by some of the best vocals I've heard in a long while and backed with outstanding, quality, true rock instrumentation. 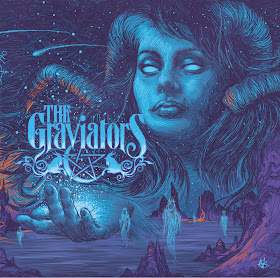 The dateline remains Sweden, as we now descend upon Malmo and the awesome band The Graviators who have recently released "Evil Deeds" on their new label, Napalm Records, which is a fitting name for the label behind this blistering hot rock band. What The Graviators offer up for your listening enjoyment is a ten track collection of nothing but quality music, songs that will simply rock your face off! The experiences these guys have had in their short existence since forming in 2009, and the connections they have made, have lent themselves well to crafting an album of high intensity and sheer brilliance.

The Graviators make no bones about from where their musical influences come, pointing to the Seventies as their favorite era for rock music with Pentagram and Black Sabbath providing some of the biggest inspirations. Their first music video was titled "Back to the Sabbath" in a definite ode to the great pioneers of stoner style rock music.

When listening to the great music on this album you can hear a hundred influences intertwined and infused all throughout the songs. Though the influences come from their favorite inspirations of the past, what they have crafted for "Evil Deeds" is never a copy of any one song or of one band's style from anywhere in the pantheon of great rock. These guys are gifted creators in their own well earned right, conjuring songs and music of tremendous quality, delivering catchy melodies ingrained and infused with brilliant sections of white hot solos, or earth trembling mega fuzz from Martin's ferocious guitar. The Graviators unleash the might of their powerful, driving bass guitar throughout their songs, where it not only provides the typical rhythm and driving forces of a song, but also offers up fun and satisfying sections that aren't the typical, almost token bass offerings. The drums as well get to exercise and showcase how utterly rocking a song can be when more than just guitar gets an opportunity to showcase what it has to offer. Rounding out the overall effect of these exquisite songs is the superb and gifted vocalizations by Niklas, whose voice is an ass kicking instrument in its own right, delivering the coup de grace that sets this music apart from anything else that may be more ordinary or mundane.

Part of the great sound on this album was the method in which it was recorded, all on analog equipment in the Napalm studio, lending itself to the great full blooded fuzz distortion at the edges of the music on "Evil Deeds"

There is no song on this album to avoid, they all play well when your stereo, in whatever iteration you use, is maxed out on the volume setting. Song eight, "A Different Moon", for instance, has both mega-fuzzed guitar intertwined with supernova solos that will blister your eardrums while the walls crumble to the ground around you. The opening track, "Soulstealer" is a beautifully delivered one two punch of a song, with hooks aplenty and a greatly satisfying melody. Number six, "Hexagram", is genius in structure, getting quickly into your head where you will find it trying to get out for hours on end after you've quit listening to it directly. Perhaps the most incredibly and intelligently structured song on the album is track number five, "Feeling Low". The guitars open with a dumptruck load of fuzz and a tempo that has me breaking out my air guitar on the spot. Henrik gets to showcase his expert punching of the stretched skin in places on this track, and while it's not much, it's incredibly enjoyable. The main contender for the title of best song against the aforementioned "Feeling Low" is the title track, "Evil Deeds", which is similar in tempo and structure, similar in volume, and brilliant in melody.

The music showcased today just happens to come from the same great country, Sweden, and just happens to be of the highest quality, with guitars overgrown in power and distortion and vocalists that are able to deliver with overwhelming skill. These albums are top notch as either one could be on the best album of the year lists.