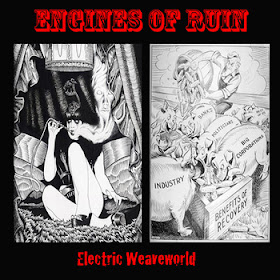 Approximately one year ago Heavy Planet introduced Dublin's finest instru-metal groovers Engines of Ruin with their full-length Triquetra. Known for layin' down "tons of wah-wah and reverb" and Karma To Burn inspired riffs, Engines of Ruin quickly became a Heavy Planet favorite and landed on Podcast 06, The Emerald Isle. Well, as time moved forward, life changed and Engines... spent some time as a two piece. The brothers decided to continue onward and in the process found themselves covering vocals and adding some texture to their already diverse sound. The group soon added a new bassist and is looking forward to releasing a three volume set entitled The Road Of Ruin. While the set has no definite release date at this time, Engines... decided to drop a split single to ease our anticipation. The single includes two tracks Electric Weaveworld and Corporate Blues. The first track, Electric Weaveworld, is a stoner classic, a bag full-o-riffs, and certain to please Kyuss fans out there. Corporate Blues was the surprise treat on the single where Johnny [drums] drops his sticks and stuns us with his slide guitar glory and authentic blues recording... you won't know what hit you. What ruin does Engines... have in store for us next you ask? Well be sure to stay tuned and we'll be sure to keep you in the know. 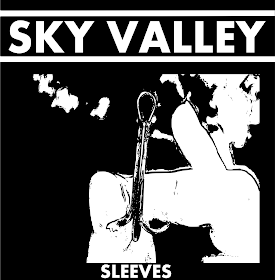 Sky Valley, not to be confused with the Kyuss master-piece, are a Texas quartet who don't venture into the sound of desert rock, although I'm sure are inspired by their [Kyuss] creativity and all around kick-assed-ness. So there need to be no comparisions. What listeners need to know is these Fort Worth natives have created quite the versatile record in Sleeves. The EP is made up partially from demos from 2010, after which the band decided to take a long hiatus, and 2012. Being split by the title track, a listen-able instrumental morsel, listeners will find two very different and distinctive sides to Sky Valley. The first half's, and more recently recorded, songs find sturdy ground somewhere between the instrumentality of doom, drone, and sludge and the anxiety-ridden vocals of indie and post-rock. Honestly, I was startled and intially turned off by the vocal approach, but after a second spin I found the vocals adding an unexpected character and texture to the text-book doom sounds we love so much. The second half, recorded in 2010, finds a catchier and more 'grungie' sound with Roll Me Over and then breaks all expectation with the phenomenal Winter Takes and In Orbit. Interested in finding out why I love these tracks? Click play below to spin Winter Takes and then head over to bandcamp to hear my other favorites In Orbit and Pinned.