The name of the game today, followers of the doom, is pure, sweet rock. Nothing fancy, nothing way off center, no adjustments needed because you have prepared your whole life for listening to this type of music, where the guitar is king, the drums are worthy, and the bass is the badass enforcer of sonic onslaught. Just be sure to limber up those cervical muscles in preparation for swinging that head, something that always comes when the rawk is being righteously rolled and the rawk is pure rock, and is something beyond excellent, beyond great, something that is simply goooooood goddamned rock. 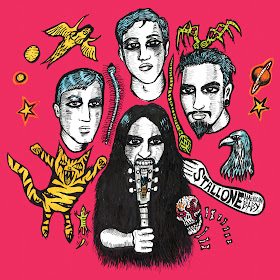 When the lead guitarist for the awesome groups MonstrO and Torche, Juan Montoya, began playing for fun with work friend and gifted drummer Evan Diprima at a friend's house in 2009 an instant vortex of creativity and energy was unleashed onto the rock world. After recording a few songs together they realized the music was something worthwhile and needed to take that next step toward putting it all out there for the world. Montoya recruited Thomas Gonzalez on second guitar and C.J. Ridings on bass and before too long they were Stallone and had recorded "American Baby", a six song compilation of pure, unadulterated, unfiltered, and riff laden rock and roll.

What is extremely cool about Stallone and "American Baby" is the lack of vocals as a fifth instrument, placing the music out there front and center and inviting the listener to climb aboard without benefit of vocalization. Songs like that have to have the energy and substance to sate the musical cravings of the listener on each iteration without presenting any gaping holes over which to glide. There can't be the repetitive sameness that would quickly breed disinterest without the masking vocalizations of a lyrical entity. Montoya and company pull that feat off with vigor, skill, and aplomb.

The guitars are thick and fuzzy, down tuned just enough to be lush and toothsome while the rhythm section displays a potent attack of bass and drums. All six songs bring pure rock pleasure in their nimble yet simple affectations. From the opening tune, "And Begin", where down tuned stoner guitars are demonstrated during the songs's introduction and blaze a distorted trail throughout, to the funky, stylish, yet fuzzy "Beyond" where the solos sear a hole into one aural canal and out the other, and finishing up with "Ancient Infant" an apt epithet for a song fresh and full of both inventiveness and old school guitar riffage that scorches and burns like old school rock, like it was meant to be played, like you want to hear it every time you get the chance to listen. 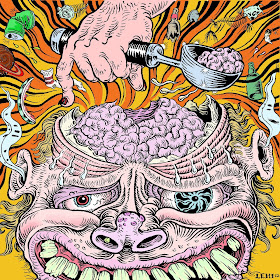 LECHEROUS GAZE - "On the Skids"
Out of Oakland, California come a band, Lecherous Gaze, that has many intriguing and compelling aspects, not the least of which is their ability to flat out unleash the rock. Borrowing from the bio on last.fm :
"Annihilation Time had a heart attack. We gave it a baboon heart. It became Lecherous Gaze. Asshole Rock. Come Hungry."
Those few sentences give incredible insight into this foursome of friends that were born to play hard, heavy, old school rock and roll, born to be in a rock band that conforms to nothing at all other than what they define as great rock and what sounds to them like great music. You just gotta love it.
Band members are Noel Sullivan, Chris Grande, Zarian Zaidi, and Graham Clise.
"Into the Skids" isn't due out until early October, but below are some links that will let you know just exactly how incredible this foursome lay down the licks. Their music is old school, new school, future school, only school, combining intelligent melodies, let-loose execution, once-in-a-generation guitar work that will assault you at the same time it cajoles you to delve deeper to discover hidden riff treasures so precious they could devalue the gold and platinum standards by the time you finish playing all eleven tracks on this album.
Each song on the album is pure pleasure, providing a significant collection of rock tunes flush with fever that'll boil you senseless as it fries your brain to a crisp. "Frustrated" is big and voluminous in sound, with a beautiful tempo that strikes directly to your primal core before surrendering to a white hot solo radiating with brilliance. "War Woman" is a supernova riff engine that delivers pure enjoyment with its plasma beam solos that rip you a new one while leaving the edges cauterized and clean of unnecessary clotting and seepage. "The Grasp" displays the same tremendous dexterity and pureness of sound as its brethren while offering a slight variation on the melodic song structure that has been to this point the central theme throughout the myriad hard and heavy offerings, this time providing a slight change that simply adds to the majesty of the collection. Perhaps the ass kickingest song on the album is "Bagagozo", which is a ripsaw blade glowing blood red as it slices its way through a thick, meaty, fuzzy melody overlaid with searing, scorching solos of magnificent delivery.
This foursome have fun with their music, and relish in their ability to deliver rock that is fine and pure, comparable to any of the best ever made in any era and in any place.