New Band To Burn One To: JESSIE DELUXE 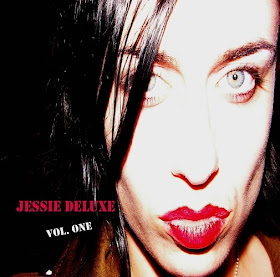 Jessie Deluxe describes her sound as heavy, melodic rock. Her songwriting is dynamic and powerful, featuring choruses that "lift you high in the air and then smash you back down into the ground". This is 'in your face' rock n roll that conjures up the grittiness of P.J. Harvey and the sex appeal of Elvis, all the while adding her own unique edge.

This fiery front woman packs an authoritative punch live with her amazing voice. As she shreds on her Flying V, she commands the audience with the conviction of a rock icon. It is no surprise this L.A. based band has become well known for high energy shows and electric performances.

As for her background, Jessie has garnered the attention of various producers such as David Rowntree (Blur), Dave Jerden (Jane's Addiction, Poe), and Geza X (Sonic Youth). Her influences range from Hendrix, David Bowie, Annie Lennox, to NIN.

Jessie is a driven rocker who without a doubt plays a deluxe brand of rock n roll. Big guitar, big vocals, high energy, and classic rock sounds that harken to garage, grrrl power, grunge, stoner, and sixties rock, bundling it all up in her own high voltage overture and dynamite presence. She has enlisted the mighty bass services of Sasquatch's Cas, who will only heighten the sound of the great songs Jessie writes as well as complement her nimble, lightning bolt guitar licks. Jessie Deluxe is currently writing and recording, as well as touring, so they are looking to release something new early in the coming year. The new release is bound to be a gunpowder keg of dynamite rock, but in order to satisfy an appetite of in your face riffage and on fire metal mayhem that unleashes a ton of energy, fury, and fun sink your teeth in the meantime into Vol. I, available on Jessie Deluxe's website.