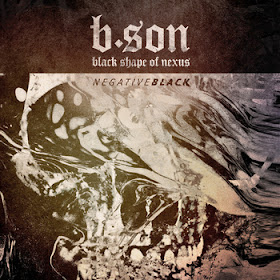 I ask any supposed doom fans, have you ever shared a bed with a Woolly Mammoth. If the answer is yes, you might be able to fathom the type of love-making that went on and was recorded to create this record.

Black Shape of the Nexus' Negative Black. It's a behemoth of ferocious magnitude and an ancient sound. The tambre evokes Dopethrone-Era Electric Wizard.

1."Illinois"- The opener is the traditional astral drone. Irksome atmospheric guitar blisters and howls. This tune is long, sonically over-powering and nasty. A mood-setter.

3.60 WV- Another sludge debaser, this one punches at an slow grind and trembles others. It delivers Om-like mischief with slow consistent repeated passages of the bVII to the I .

4."10000 uF"- A 20 minute long dirging trip of chaotic doomness. Punchy gallops herald the intro, which whirls into another droning tapestry of slow nasty ideas. It eventually crashes into a swirling shrieking noise experiment.

5."14d" - Continues with the thematic passages of droning soundscapes previously explored, sort of has a bell curve of potency and slowed down catastrophe before slowing down into the depths once more.

6."RMS"- A trippy guitar laden voyage of whispers and echoes. A mellow noise track to whisk in more time before the menacing finish to the record.

7. "Neg.Black"- Has some of the the longest overdriven sustains anywhere. Ever. This one bleakly roars until a tribal series of movements around 15 minutes. There is some interesting sound experimentation, feedback melting and large drum room sounds give a lo-fi vibe.

A decent record from an artist gaining some degree of klout in the doom realm. Grab this one by the tusks!