Sunday Sludge: Clinging to the Trees of a Forest Fire - "Visceral" (EP) 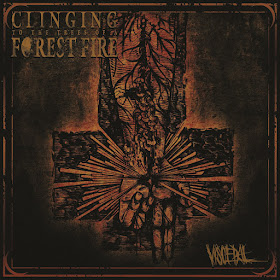 This coffee just ain't workin'! Short on sleep, long on swirling thoughts, and peppered with Sharpie tags that make little sense, today wasn't looking bright. I can't find my right shoe and I probably could've slept through an asbestos alarm had my neighbor not broken into my garage looking for power tools. Enter Denver's Clinging to the Trees of a Forest Fire and their blistering six-track Visceral, a release that smacked my skull with a wet fish and beat me awake.

The drone of a single, evasive doom chord begins ///, an ultimately subdued dry-heave of fluttering drums and brief noise. This intro is fleeting until Lower than Life, High as the Sky presents the dirt-caked vocal of Ethan McCarthy (who also takes credit for the searing guitar stabs on this release). Moving from sludge/doom to thrash, chaos ensues and knocks you to your ass. McCarthy chokes through pained vocals as spooky and unnerving doom rolls and waivers.

The album's three-song thorax is an exercise in grinding, abrasive gallops that spray grime faster than you can close your glazed eyes. Garbage is fast, filthy, and more fucked up than that fifth-grader who smells like piss and carries a dead animal in his lunchbox. The move toward a sludge groove is the reason you're reading this, and that sludge boils and sticks like agent orange. JP Damron's pummeling is just one of numerous thrash elements too abundant to ignore, and the descent of Special Education will leave your face blistered and your palms slippery. Crawling from the mud pit on Biracial, CTTTOAFF maintain their torchings and slow to a bulldozed rhythm (Zach Harlan's bass maintains a seemingly impossible balance) only long enough to catch a scant breath.

McCarthy's hollow growl steals early moments on Asthmatic, no small feat among his swinging pendulum riffs and the shifting rhythms underneath him. This is easily the album's highlight, holding a cloudy cadence simmering with harnessed energy that (wouldn't you know it) just won't be contained. The bouncing, negative doom and sludge complacence carry out the track (and album) that breaks its neck pulling from its chains.

The only detraction from this EP is that listeners will certainly want more. The relentless canter is exhausting, however, and maybe the band candidly did us a favor by keeping things brief. Melding grind and sludge sounds like a recipe for disaster, but Clinging to the Trees of a Forest Fire pull off seamless transitions and craft an undeniably brutal and pensive death rattle that will please metal fans of any ilk. Visceral is the Symbionese Liberation Army to any listener's Patty Hearst. This disc will beat you senseless until you begin believing your captors are right.