New Band To Burn One To: DEAD SOUTHERN BISHOP

Today's "New Band To Burn One To" comes from Georgia. 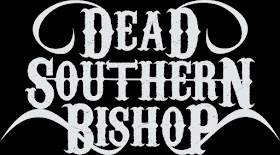 Dead Southern Bishop was born early in the year of 2008 and that May we played our first show. The following Febuary we wento Zombie Studios and cut five tracks of southern sludge groove. Our self tilted ep was pressed and released late March of 2009 to rave reviews from the likes of HellRide Music, Doom Nation and Skulls n Bones. In May of 2009 Brian Lane was added as a second guitar player to round out our line up. After countless more shows shows and an un-recorded new ablum, things came up and in August of 2010 we had to put DSB on hiatus. During this time bassist Chris Morris moved back home to West Virginia and Brian Lane stept down to sepend more time with his family. Now in 2011 Blake, Billy, and Ben decided to resurrect the band with new life and a new sound. Going back to the roots of DSB sounds and stripping it down to go for the throat!! Late in the year of 2011 the band entered Red Rocket Sounds to record a new ep with Franks Sikes (Drummer of Starchild.) at head of production!! The studio sesson would be called "Hymns Of Malice And Discontent" an ablum screaming with a wretched distaste for life, hopeless salvation, and the woes of addiction.


"As if evil itself plunged you into a caustic swamp, Dead Southern Bishop's thick fuzz and hell hath no fury vocal layering leave you doubting if you will ever make it out alive. These southern boys wind and grind through five hair-raising songs of sludge, sludge and more sludge on their latest EP "Hymns Of Malice And Discontent". This music is pure, raw, unrelentless and not for the faint of heart, but holy shit if it isn't awesome! And oh, did I mention right now you can get it for free on Bandcamp."