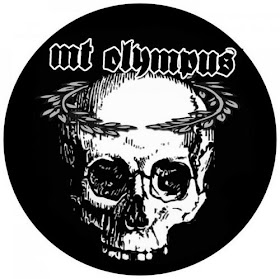 Have you ever listened to a band or to an album and had the antagonistic thoughts, “This sounds very familiar” as well as “I have never heard anything like this before”? It would be rare, if ever, right? But that is exactly what went through my mind when listening to Mount Olympus on their 2011 release “You’re Welcome”. Many of the tunes on this badass batch of boogie sound like songs you’ve heard before, hearkening back mainly to the latter years of the seventies or very early eighties, when lots of really good rock was being played by bands both known and obscure, rock that had not quite yet begun to evolve en masse into specific genres, sounds, or categories, but was still driven by the song itself, and by wielding that classic rock structure of hard hitting guitars, big bass, big drums, and huge vocals. But Mount Olympus, with their high energy, pulse popping songs, also invoke a sound that has its own unique stamp and structure, its own big rock sound, almost as if rock and roll had never deviated from its sound of the seventies but had continued to grow in the same direction, constantly creating great music, legendary sounds, and kick ass quality rock.

Mount Olympus began with Mike Guggino and Carter Logan hooking up in New York after Mike had moved there from Philadelphia. As it so often happens with musicians, bands are in flux, band members are on the move, and sometimes the right mutation spawns a great partnership, which is certainly the case when Mike and Carter were able to enlist the services of Dickie Spectacular and Sharif Hassan. Mike’s vision of “ . . . a face melting, rippingly awesome guitar rock band with it’s own special brand of sassafrass sauce . . . ” has come to full fruition with this lone album release, supplemented, of course, by touring extensively throughout the areas surrounding New York City.

The initial introduction to Mount Olympus’ music comes with the first track, “Season of Evil”, a heart pounding, pulse racing, head banging beauty of high tempo fun and energy. The sound is big and forceful, the melody clips along with a wonderful rhythm, punctuated by short interludes of exquisite guitar work, and driven along with Guggino’s forceful, rough vocals that match perfectly with the sound.

“Fire in the Sky” slows the tempo down a bit, allowing for an interesting and catchy intro that leads into a deliberate and expressive melody that is catchy and evocative, stirring up deep, dark visions, punctuated by blistering guitarwork and some of the most insistent drums you’ll ever hear. Mike’s vocals here have a reminiscent quality to them, an almost revival feel, evoking primal stirrings that meld into the flow of the music.

A blistering, hot guitar jump starts “Evil Boogie”, which is anything but evil with its powerful rhythms and up tempo sound. This is a terrific tune of superb structure and delivery. Each guitar solo kicks up the heat from its predecessor, and the vocals are delivered with gusto and verve, along with a tremendous, loud, full and thunderous bass accompanied by fast and furious drums. This song may soon have you singing along while you inevitably bounce or bang to the great pace and rockability of this up tempo gem. This is quite possibly the best tune on the album.

While the previous tune might be the best song, this next track has the best name – “Squeezing On My Bloodclot”. It is a terrific song in its own right, another one that evokes music of the past while making its inevitable and singular mark on the uniqueness of the album. This song, too, is up tempo and displays Guggino’s wonderful vocal stylings along with full and rich instrumentation on all fronts.

“Get Your Ass to Mars” is another vocal driven, guitar punctuated marvel of a song, that displays high energy, highly intelligent writing, and gifted musicianship, followed by the tune “Magic Hour”, evoking music from rock’s past while presenting a great sing along component before moving into a high energy solo section filled with tremendous and tasty riffs that simply blister and burn, besiege and bombard with an all out ferocity of strings.

The album closes with “Wolfman’88’, a fitting selection for the auspicious duty of ending such a fantastic, unique, and well executed rock collection. Wolfman ’88, like all the songs before it, delivers the goods, creating and executing in all phases and stages music that is the best of what we like to hear, that doesn’t just show up at the door, but puts a ton of talent and heart into producing something that is not only unique, but ultimately worthwhile. You cannot go wrong with this outstanding album, because Mount Olympus has certainly done it right, deserving of the thanks for which they’ve already responded with “You’re Welcome”.