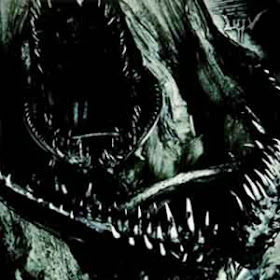 Children are great at doing the exact opposite of what they're told. When I caught my two year-old under the sink with a copy of Lurk's debut in his clutches, I guess I couldn't be mad. But, fuck... This isn't something I wanted him getting into. He's supposed to be coloring, playing, and mouthing off. Instead, the subject of this week's Sunday Sludge has arrested his development and likely derailed my guidance.

Finland's Lurk formed in 2008, forging what they call a "collaboration between doom, death, and sludgy black surge." On their self-titled debut, the band announces their candidacy as the ugliest Finnish export since Lasse Viren. Lurk's brand of sludge-doom is dark, vile, and as uplifting as a pet's untimely death. These six tracks take their time in bludgeoning listeners with tempo shifts and intermittent sensory assaults, but the lyrical content is what'll have you reaching out for good friends and a bottle of pills.

The slow, jaded grind of Soar is characteristic of most sludge records, yes. But the mire grows thicker and stickier, with the entire band working together to move as slowly as possible. Hollow grooves jump from planes and wring their heady buzz, but the vocal from K. Koskinen trips your feet as you run from the dark. We're only eight minutes in and our skins are already clammy.

The thrusting crust is immediate on Unfinished's sea of rolling doom. The grind pauses, but the beating doesn't stop. K. Nurmi's sepulchral drums combat Koskinen's guttural extraction, heavy with accent. Codec of Becoming God follows with its gorilla-chest thumpings and slow, teeming meters. Introspective lyrics almost seem inviting, though the path only leads to a rusted garden of twitching limbs. Didn't I warn you?

Ah, but Lurk do pick it up some on Fire The Blood Sky. The sludge here gets pushed under itself, and A. Pulkkinen's guitars saw through brick walls and find a spooky, effective bass highlight from M. Reinikainen. There's an enveloping sound here that's categorically undefinable, but it never falls short of sounding like tortured spirits. By the time we reach the cathedral, we're pretty far gone. Lurk led us here, attesting we'd be alive but likely not sane. Right again, boys.

Slow cadences are the band's muck and mire, however. Pitch Beneath Eternity greets with slow riffs, bullying drums, and a sonic drop that's intense and incredible. Koskinen's pipes are more gutteral and weathered by this point, while the track itself crunches under your boots and slows to its knees. Trickling from a cliff rather than saturating with buckets, this sludge is damn-near gnawing off its own arm. How Lurk manage to stay the course through these plods and plugs is an exercise in metal magic.

Finally, the grim drag through a wasteland you used to call home is actually the album's closing track, Deliverance. Those distant guitar cries are comforting but they won't help a damn thing. Factory sounds creep in and you'll find yourself walking barefoot on broken, rusted nails. A cool lumberjack stomp is perhaps the best moment on the disc, rife with Zakk Wylde riffage to counter the Crowbar sludge. But those clouds roar back, harvesting a doom thunder that's not going anywhere anytime soon.

Can you handle forty minutes of total darkness? What if that forty minutes stretches into much longer? Lurk have carved their name into your forehead and they've got you in line. The surrounding screams are those of the stricken. This is grim, grimy, exhausting stuff, and you'll be hobbling on clubbed feet before long. Keep this out of the reach of children. Keep a tight lid on it. And maybe you should pretend this conversation never happened. But that's hard to do when the sludge is this good.