New Band To Burn One To: PET THE PREACHER

Heavy Planet presents today's "New Band To Burn One To"... PET THE PREACHER! 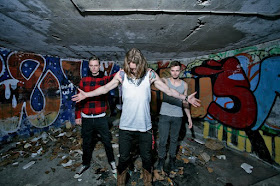 Pet The Preacher is a rock N roll trio from Copenhagen. Their aim is to mix blues with the structures of metal and feel of prog-rock. But as a band should, they are ever evolving, and as the band was formed in late 2010, the journey has just begun.

Pet The Preacher released Meet The Creature in 2011. A 3-track EP recorded live at the DEAD RAT STUDIO with Jacob Bredahl producing. In December, the same year, they went back and recorded their debut album "The Banjo". A concept album about a man and his way out of his hell. It made with a strong philosophy about sounding like human beings, playing instruments and not a computer. The mistakes are seen as opportunities and captures what rock N roll is all about: Spirit.


"Pet the Preacher plays heavy rock the way it was meant to be played, with attitude and passion. This band from Copenhagen has married together a euphonic collection of blues-based rock tunes seasoned with crunchy guitars, heavy groove, and plenty of emotion. Emotion that you can feel in the shredding guitar leads, rapid fire bass lines, feverish drum beats and emphatic vocal delivery. New album coming soon...until then check out the tunes they have up on Facebook"