New Band To Burn One To: GENERAL 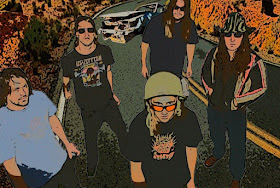 General have been released from active service and are building up a dedicated following throughout the midlands heavy rock/stoner/doom scenes with interest and fans from under many stones in the world.

The current line up have been imposing themselves on the live scene with the thousand yard stare and no respect for volume levels due to years of being in the shit too long.

Recent shows have been very successful with gigs alongside Napalm Death, Senser, Alunah, Sally, Pulled Apart by Horses to name a few !

GENERAL draws influence from many sources and have developed a sound that is comparable to a woolly mammoth playing its smoothest, grand riff whilst singing with the wise tones and melodies of a 1000 year old rock wizard.

‘Heavy rock the way you want it done’.

Currently working on the release of their debut album ‘Where are your gods now’ recorded at Priory studios and mixed and mastered by the renowned Billy Anderson in California.

The online release of the video for ‘bullet train’ off this album was a huge success generating over 1500 views in the first few days.

With more work in the pipebomb line and a dedicated fan base expect to see GENERAL hurting ear drums near you soon.


"General is a band from the UK that has a huge buzz surrounding them. Aside from the fact that the legendary Billy Anderson has worked with them, this band is laying down some pretty fat Stoner Metal jams worthy of your attention. Fierce, soulful and in-your-face, these boys know how to rock and I'd say they do it rather well."