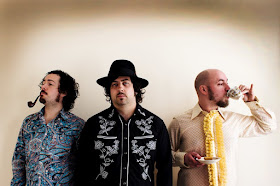 Bio:
Superhot Records is very proud to bring you it's first release and the debut album by British psych rockers Stubb. The self-titled LP was cut to tape in the winter of 2010 at Dropout Studios in South London with Tim Cedar of Part Chimp.

Like the guitar tone the live vibe on this record is thick, this is a real band playing real songs in a basement studio with minimal overdubs. Stubb contains 8 modern salutes to the early 70s with lyrical themes covering love, loss, the open road, women and the powerful force of nature.

This is much more than just a one dimensional record though. ‘Crying River’ featuring Malin Dahlgren from Swedish folk duo Polly Tones and the acoustic ‘Crosses You Bear’ provide contrast to the full on valve abuse of songs like ‘Hard Hearted Woman’ and ‘Scale the Mountain’. For the most part however, this is a power trio doing what a power trio does best; warm fuzzy guitars, bass heavy songs, frantic solos and an excessive use of wah-wah.

After touring the UK and Germany with 70s rock preservationists Stone Axe in April 2011 Tony Reed (Stone Axe, Mos Generator) was hired for the job of mixing and mastering. Reed, who has recently finished recording the new St Vitus record, was the perfect man for the job having seen the band live many times and whose own band Stone Axe shares a similar musical heritage.

In April 2012 Stubb will head out on the road again with Stone Axe and fellow Britons Trippy Wicked & the Cosmic Children of the Knight in support of the album. The trip will take them around the UK including a stop at the inaugural Desertfest in London and then onto mainland Europe.
Superhot Records release number zero zero one will appeal to fans of Cream, Taste, Graveyard, The Jimi Hendrix Experience. 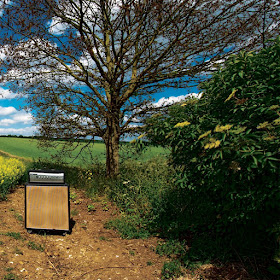 It’s nice to come across a band who takes their music seriously without taking themselves too seriously, and I believe Stubb falls right into the middle of that category. They are serious about their music, and they are serious about playing it, something you might not glean from the band’s portrait photo that accompanies the album where they are obviously having a lot of fun with the process of adorning this awesome track collection. The release of their self-titled debut album is a quality achievement, with the predominant sound on this album super heavy, fuzzed out and distorted, riffs and hooks in all the right places, melodies intertwined with the onrush of anabolic sound, vocals that deliver a wonderful and adept finishing touch to exceptional music, long and trippy interludes that harken back to the first era of rock glory, while making a case for inclusion in this, the second era of rock glory. As mentioned above in their press release they depart from the hairier tracks on two occasions, but for me those departures prove they are about playing top notch music, caring first for the craft and quality of their chosen art, while happening to apply that craft to full bodied and muscular rock. I believe you will find yourself listening to Stubb again and again, discovering all the nuances and wonderfulness of each part of each song, while letting the music trigger the primal drive deep inside through exquisite compilations and adept renderings of their hearty work.