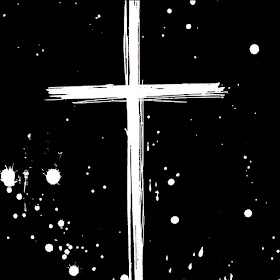 Loosen up your stomachs, folks. Today's featured band is France's Monarch, and their sound could be called "boues funérailles dimanche." To categorize the band as "sludge" would be wholly misleading. The absolute gut-wrench of doom steals marquee billing here, and you can almost hear light snow tapping cold headstones. This is mournful sludge kneeling at the precipice of an open grave.

While the sound at most funerals is one of either sadness or reflective celebration, Monarch's Omen is a shrill, haunting drone that blankets listeners with hovering guitar buzz, torturously distant vocal delivery, and painstaking rhythmic grind. From beginning to end, the three-track, thirty-five minute lamentation is veiled in black sludge dirge, slowed to a crawl as if to allow for a pensive search for answers we won't soon find.

Hollow, ghastly, spooky. Take your pick, but adjectives won't do justice to the crunchy knell of Blood Seeress. A misty choir echoes just beyond the riverbed as crushing blows are delivered in beautiful succession. Emilie Bresson's screams are slow, bruised, and ten miles beyond casket-crawling anguish. Whether she's holding a burning cross, a melting candle, or a thorn-riddled Fleur-de-lis is of no consequence. Atmospheres are kept eerie with distant drone and Rob Shaffer's arduous drumwork is a tithe for your sins. The fuzzy sludge is just enough to help you remember these sounds are in your headphones, not your mind. But be careful.

Transylvanian Incantations is an intermission of sorts. The dead haunt this vacant corridor and you can almost hear flickering candles amongst the sustain. It's strange to think of something this spooky as a cleft in the filthy, tormented canvas of the tracks bookending Omens. But whatever the intentions were for this track, Monarch seem to get it just right.

Building slower than your dusty grandfather's sex-drive, Black Becomes the Sun is damn-near twenty minutes of pounding, buzzing. Shiran Kaidin's guitars are crunchy and magnetic without being outdone by a cathedral's echoes. The track's sludge/doom/drone is, however, broken down into an even slower, fuzzier purr. The Sunn 0))) influence begins its whispers, but the throaty hiss of fecund evil counters preconceptions. MicHell Bidegain's bass underlay drives the tempo into scorched, blackened earth, though the sludge maintains an almost lilted buzz. The song's second chapter, however, is the strongest representation of vocal balance between whispers and screams. The mood is one of woe and heartache, but lush, barbaric fury has its place as well. We didn't think humans were capable of creating these auras. Actually, we didn't think ANYTHING was. 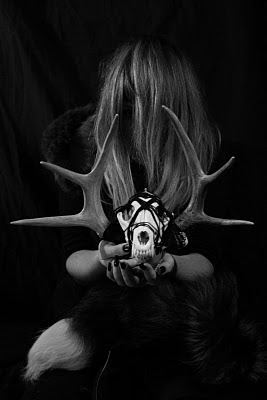 Omens is like that cold you feel in your bones. You can light a fire, crank the thermostat, and wrap yourself in flannel, but that damp ache just won't let you be. If the rhythms here were any faster, they wouldn't be as gorgeously troubling. Monarch haven't lost all hope, but on their sixth album they cement their footing as funeral-drone kings of the most melancholy nature. The spirit is troubled, and you can bet your ass you won't sleep well tonight.