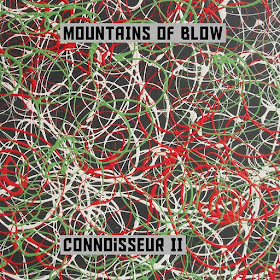 So marijuana is little more than the first step toward harder stuff, right? I've been caught in some seedy bathrooms and been able to talk my way out of handcuffs, but how could I pass on Mountains of Blow? Don't let the name fool you. The band is from Los Angeles (not Miami), nobody's yelling "Wu-Tang Clan ain't nuttin' ta fuck wit'!," and those bangers at the corner of La Brea & Santa Monica (y'know... always wearing Scarface hoodies) wouldn't go near this stuff.

Connoisseur II is brief, mostly instrumental, and the first thing you'll reach for when you can't see your finger in front of your face. This pensive hand-hold through dense fog, however, has merits far-beyond the extra-curricular accompaniments. Shane Berman (guitar, bass, vocals) and Billy Hawken (drums) are a perfectly formidable stoner-psychedelia tandem that drifts in underwater escapades and follows up with moonshots.

A fuzzy, distant trill characterizes Dial, channeling a slower, dreamier Truckfighters atmosphere. Guitars buzz with confident warmth and take listeners back to that cozy womb we've been trained to forget. Chew on this groove and let it carry you on a distant cloud where your feet can park in the sand. A little dust never hurt anybody.

Narshe's whimsical dreamscape picks up right where Dial leaves off, rife with lilted guitar moxie and fuzzy strata. The perfect marriage of somber and peaceful pulls you underneath a tripped-out psychedelic fade, barely leaving a moment before FSD's doorstop coils echo off one another. The song builds steadily toward a chk-chk-chk guitar grind and we hear Hawken's drums crushed to fine powder. Balance moves left to right, back and forth, until we're so fuzzy we can't even think.

Mountains of Blow shift gears (and I mean it) on Matrix (Red), a rougher cut with (ah-ha!) vocals. The raw, primal change of pace is suited for a rain-soaked nighttime prison break and does its part to cast a shadow of intrigue on the album's other four tracks. Bass stays low and unhinged, the entire sound grows heavier. The crunch nearly gives way to a village-plundering doom scrape, but January's molasses shotgun Berman's haunting whisper. This cavern-echo spook is the album's high, but the guitar's dive after dive make for II's shining declaration.

Smoky, hazy, foggy... the album's closer, Whorepaddle (10 bucks, 12 bucks) is any number of clouded experiences. The bass canvas is dusted with flaming guitar ribbons, growing slower and slower before the rockin' desert stoner licks trip you to a stumble. Hell, if you're gonna close out an album with a thick, 5 1/2 minute trip through the nowhere place, you might as well distort time as much as you can.

And that's sort of Connoisseur II's entire scope. You're not gonna need any herbal supplements with this album; it's plenty trippy on its own. You're not gonna piss your pants and forget who you are for thirty minutes, but these songs could easily carry you to a place where your business dinner seems less important. Don't worry. Mountains of Blow won't leave your rusty pipes with a nosebleed. Your ears, on the other hand...