New Band To Burn One To: KOSMOGRAD

Kosmograd is today's "New Band To Burn One To". 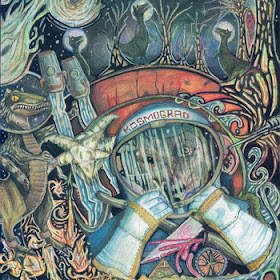 -Kosmograd is a band from Toronto, Ontario. It formed in winter of 2009, when Yegor, Todd and Phil decided to jam after a Boris/Torche show. Kevin played guitar in Todd’s previous band and joined on bass a couple of months later.

-The name Kosmograd comes from a Larry Niven & Jerry Pournelle book FOOTFALL, but also has a lot of other science fiction and space technology tie-ins.

-All the members come from a punk/hardcore background but are influenced by a wide variety of music, from doom and sludge, to post-rock and noise, as well as a wide variety of science (fiction), especially space and dinosaur related.

-Released 3 digital demo songs throughout 2010, 2 of which were re-released by the local tape-only record label Delicate Artifacts.

-Played dozens of shows around Ontario/Quebec and have shared the stage with touring acts such as Junius, Caspian, Kayo Dot, Krallice and Withered, as well as up-and-coming locals such as Titan, Vilipend, Alaskan, Mountains Unfold (QC), Eyeswithoutaface, Kraken (QC), Teethmarks, Godstopper, and more.

-The Self Titled EP was recorded in March 2011 by Sean Person at Boxcar Sound Recording studio in Hamilton, Ontario and mastered by Ryan Mills. It was recorded live off the floor with minimal overdubs.

-The artwork for the record was hand drawn by close friend of the band Matt Poch, it is a 2’ by 4’ poster that is going to be printed for a limited run in the near future

-The record was released digitally on Bandcamp in September 2011, stream or download it now!

"On their latest self-titled EP, Toronto-based band Kosmograd create a chilling and diverse brand of heady metal. Within the somewhat raw production lies a spectacular sense of calm and devastation. The fuzzy crunch of the guitar gives way to soft and subtle interludes only to have a disconcerting vocal rip into your aural passage. "Cheeseburger Picnic" floats through the galaxy with an airy guitar tone and then unmercifully collides into the next track "Velossaraykin", a textural mindfuck that thrashes about through the exploding asteroid particles. Kosmogard has released an EP that is aggressive, cerebral and fluid. The songs are well placed and thoughtfully structured. Check these ambient post-hardcore sludge-merchants out today!"