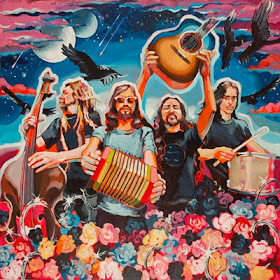 Three months ago, Heavy Planet introduced you to Atlanta's "hazy, heady" quartet MonstrO (Click the tag at the bottom of this post). We've finally managed to peel our faces from the carpet and give a fair shake to the band's self-titled 2011 debut. Don't let the band's pedigree fool you; though MonstrO is comprised of accomplished musicians, this is that rare product whose sum is greater than its parts.

There's an element of escapism to these ten tracks, which should serve as no surprise (Monstro, you may recall, was the whale who swallowed Pinocchio in Disney's butchered version of the tale). Perhaps the belly of the whale is a metaphor for conformity. Perhaps the band's name means little more than "monster" in Portuguese. Perhaps this entire discussion is bullshit; these songs are inspired and inspiring, cosmic and debased. Heavy as the disc is, it's also uplifting and freeing.

There's no drawn-out psychedelic introduction. Fantasma and Anchor's Up! serve a formidable tandem of fuzzy, lightning-quick cruisers. You'll never hear a band be so rapid and so atmospheric all at once. The melody is refreshing, Charlie Suarez's vocals are clean and classic, and the band's push to achieve elevation is blatant and confident. Trying to grasp Juan Montoya's guitar proficiency is an exercise in futility. The licks may as well be slipping through narrow mountain passes, combining precision, speed, and a destination we're not quite privy to.

The speed is only half the balance, though. MonstrO will take you in unexpected directions without bothering to turn down the volume. Olympia is seven minutes of foggy, floating buzz. The track moves from the rainiest of days to the deadest of winters, wandering through a gorgeously painful dream. The song ends up on its knees, and you'll likely do the same.

Elizabeth's distant hum pairs with Suarez's windy whisper to form an unsettling, captivating take on abduction. Staying slow and incendiary, the message is one of strength. Equally spooky is the fog of Helios, a cautious, down-tempo scratch at answers. Bevan Davies breaks the warble with a drum assault (speaking of drum assault, don't miss Stallone) and MonstrO collectively demonstrate killer instrumentation. Listeners think they'll burn out, but a crawl through the sand is just the beginning. These guys can pound, shred, and surprise as well as anyone.

MonstrO flirt with moonshot ambition, though their patient fuzz helps strike a balance. The epic march of Concertina turns itself inside out, buzzing to a lullaby of repetition. Solar's backyard pick-up stomper is furry, deliberate, and will leave you twitching. Kyle Sanders lays a low bass roll that's impossible to enjoy sitting still. Oh, and that guitar shoots up from the basement and hits the clouds in a matter of seconds.

MonstrO's coup d'état is timed perfectly, as Apollo is a slowed, dusty reprieve before the otherworldly April. Circling vultures may as well accompany Apollo's distant bass drone. Crunchy, impulsive fits characterize this intermission that sounds like you've just thrown a box of old photos into the fire. April's steady morning stroll is what I'll wake up to every morning. Guitar rises, rhythm drops, and the choral shift perfectly executes metaphors. You're better off without this girl, difficult as that may be. She's just not worth the mess.

You'll wanna give this one more than a quick listen in your car. These songs are layered, psychedelic, thick, and drunk with emotion. Desert wanderlust and stoner repetition have their moment in the sun, but shoe-gaze introspection and the awe of oceanic expanse will stamp your belly. Wherever you wanna go is where this album's gonna take you. And if you don't have a destination, that's even better. Start here.