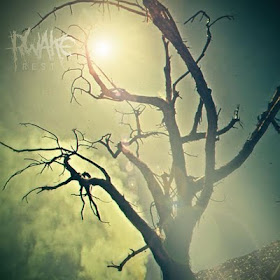 I wasn't ready for this. I'll certainly sound impulsive if I clock-in on a September Sunday to declare Rwake's Rest to be my favorite recording of 2011. This sludge/doom opus is so broad in vision and scope, I can make no promise this discourse will suffice in validating the exhaustive (and exhausting) beauty of these six tracks. I almost feel like a violator of someone's very personal, metaphysical glaze; this haunting roll through layers of pensive fog is gonna leave a mark.

The last four years must've been pretty difficult in Little Rock. Rest is laden with endless atmospheric beauty, though the lens we've been given is bubbled, cracked, and deeply stained. Rwake remain heavy, though their songwriting and musicianship here is unreal. The album's timing is likely to serve as a guidepost for imitators, while the poetry within the lyrics is beyond Sylvia Plath and a few thousand light years short of Walt Whitman.

Souls of the Sky opens gently and eerily, using little more than a hitchhiking enchantress and bayou guitar picking. This prelude leads in to the gorgeous grind of It Was Beautiful but Now It's Sour. Tempo shifts set the standard for the album's remaining tracks, while C.T.'s pipes shred as much flesh as any guitar lick you've ever heard. There's a longing here, a clawing at a distant nothing when C.T. barks "Everything's leaving. Gravity is fading." Well, the gravity of the SOUND certainly remains, but you can almost hear tears trickling into his beard. The balance between grind and roll creates a smooth hum through one man's bitter ache. Meanwhile, B's vocals certainly don't help him hit the brakes. She's flat-out scary, and the dynamic is flat-out fucking awesome.

You could say all of Rest sounds ominous and agonized, but the controlled chaos of An Invisible Thread stands out due to its inimitable sounds and instrumentation. There's more guitar shred, more up-tempo mudslinging, and more assurance that nothing lasts forever. Nothing good, anyway. The track brings a cloud of doom, persistent with rumble and hammered heavens, but driven by the rising hell of lyrics like "it’s a haunting and the sickness is the demon; exorcise through suicide and reason."

The brilliant, patient, dismal rain and bells of The Culling sound almost like heels clicking on a path of wet cobblestones. Static and space creep in, the track remains evasive, and finally the door opens to superior pacing (not easy, the track runs 16:07) and full assault. You knew the aesthetic would be extricated, making way for exposed nerves and splintered bone. Clean guitars pick up the tempo and C.T. and B do their best to drown one another, though they both float just over a harmonious gurgle. The guitar solos are masterful and well-complemented rhythmically. The track punctuates the album through its use of combative, strong-willed vocals. Without ever fully pausing, The Culling slows to a crawl and ends with listeners wondering how they left their own minds and bodies.

Was Only a Dream is just as effective and challenging as The Culling. The album's final track begins with wiry, charged guitar before being driven by pounding drums and clear, loaded vocals. The track indeed showcases Rest's sludgiest moments, while B steals the show with a snarl that could only have come from the illegitimate child of Linda Blair and a leap of starving panthers. Whew. C.T.'s exorcism allows more demons to enter, as a chainsaw guitar solo spits. A grim walk through despondence is paired with cosmic rebirth, the track fades, and we're intimately addressed by C.T. through clear, deliberate poetry. Doom arrives, symmetry between hope and hopelessness is sought, and we're taught how to conduct ourselves in the simplest terms and most-convenient definitions.

This is powerful stuff. Rwake take full sonic advantage of every single second. The sludge doesn't get buried in the message, the doom doesn't mask the solemnity. The brilliant intensity in every note and every word is well-delivered (and thus well-received), making for one hell of a unique listening experience. This is an album you'll feel, one you'll discuss, and one you'll remember. Put Rwake's Rest on your must-hear list for 2011. This album's available on September 27th. By December 31st, you'll have no doubts. NOTHING trumps this one.