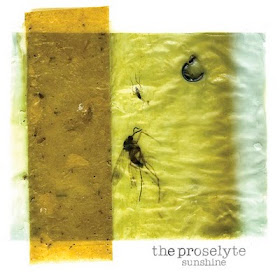 Even those who regularly attend church may struggle with a word like "proselyte." It refers to someone newly converted to a religion or sect, leading many to wonder if this band had once performed new wave tunes and called themselves Strawberry Sundae. Not likely. Given the nine tracks these wicked Bostonians (alriiight! They're from Cambridge, *ahem*) melted down, it'd be hard to imagine this band as merely sludge/stoner/spacy poseurs.

On Sunshine, Proselyte shred the loose ends of their influences and grind out a sound that's sure to transcend scarlet genre-letters and please just about anyone. Characterized by incredible guitar chops, stoner crunch, and grinding sludge rhythm, listeners are dealt a hand that may have them sheepishly admitting they like a band they simply can't categorize. Congratulations, Proselyte. You've made the seasoned metalhead feel even stupider.

Suckers Have Teeth starts like a song that doesn't fit into our convenient cubby of Sunday Sludge. Give it time. A quick start, including pummeling drums and shredding guitars, doesn't detract from the grinding howls we soon meet. Alec Rodriguez manages to extract his larynx and scrape it against a brick wall, while rhythm seems to steadily drop like coins into flaming shit. Oh, this sounds good.

Tempos slow on Four Fathers, a guitar tennis-match back-dropped with grinding rhythms and vocals fit for a eulogy. Guitars rise, bass hums, and the sludge even manages to get mellow and melodic for just under a nanosecond. The vocals here are incredible, growing distant and hollow but somehow hanging onto substance (no easy task). Stoner crunch pairs with grimy grind to perfectly complement the troubled vocals. As you listen, you wonder if this may become your new favorite band.

If Four Fathers sounded a tad like Red Fang, Grey Lady and Freedom Trail will likely have listeners double-checking their iPods. But pay attention, assholes... The atmospheric shoe-gaze of the former is repetitive, distant, and undeniably trippy. The vocals are clear, sure. But imagine having a clear mind and having no control over your body. That's where this song goes. Bass rolls and rhythm gets chewy enough to counter the flitting/flirting guitars of Mitch Belch and Nick Wolf. Freedom Trail's static, buzzy plod makes for an incredible end to an impressive demonstration. Grinding rhythm marries stoner guitar, developing a surprising harmony that tackles a solid sludge rumble (my heart swells).

Slowly entering, White Mud slaps your earhole with blistering guitars and embattled scrapes, lifting and dropping into quicksand as butchers grind ground chuck. This song's gonna remind you of sausage processing: you don't know how they do it, but you know the end product is good enough to keep you from seeking the filthy truth. Brad Macomber's bass hovers at 3 centimeters above a basement floor here while guitars slap each other silly.

Sunshine's most sludge-laden track, Legion In Vine, grinds as beautifully low and slow as Melvins, with vocals unsteady and troubled. The Smoky, bubbled rhythm counters crackling ember guitar and the paydirt is an agitated, reflective rumble that paints itself as the album's most effective track. But it ultimately becomes something you didn't expect, employing a piano and distant haze that gives way to a sludge return that would make any hard-hat proud.

When sludge is accessible, it runs the risk of being not quite sludge enough. Not quite heavy enough. Not quite filthy enough. Eh, so what? Sunshine is an album that could defy these constraints. Reject the basic assumptions of civilization. Buy this! What's that word they say in Boston? Wicked-awesome? Yeah, this album's just that. Get it.