Karma to Burn with Borracho

Karma to Burn blew through the nation's capital last night, laying waste to the Rock & Roll Hotel on their way through town. Fortunately, Heavy Planet was on hand to witness this aural onslaught in all its sonic glory. But before the instrumental trio took the stage, local boys Borracho plowed through an epic set of stoner rock grooves that had the early arrivers moving and sweating by the time they were finished.

The band wasted no time settling into their rhythm as Steve Fisher picked up his guitar and immediately tore into the opening notes of "All In Play". Noah Greenburg followed suit as he seemingly choked the song's riff out of his guitar while simultaneously introducing the Hotel crowd to his gruff, vocal chord straining bark as he demanded…"get your boots on!". Borracho proceeded to run through three fourths of their debut album Splitting Sky during their 45 minute set which was highlighted by the frenetically paced "Concentric Circles" and the doom laden "Bloodsucker". The latter of which featured perhaps the strangest sing-along ever as bassist Tim Martin joined Fisher and Greenburg in pleading "why don't you take off your clothes?" 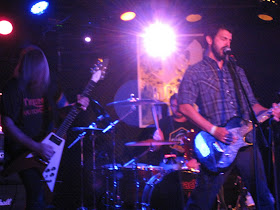 But nothing compared to the band's closing number, the epic "Grab the Reins". The song required drummer Mario Trubiano to keep the groove firmly in the pocket as Borracho journeyed through multiple tempo shifts and stylistic alterations. The finale easily spanned a quarter of the band's overall set time and showcased their uncommon ability for laying down complex grooves that meander in and out of stoner, doom and classic rock territory all within the span of the same song. This is their signature…this is their knack. And so by the time Fisher, Greenburg and Trubiano waved to the crowd and casually walked offstage, leaving Martin alone as he finished plucking out the song's funky ass bass line, it was as if to say…our job is done here…you people have been thoroughly rocked. 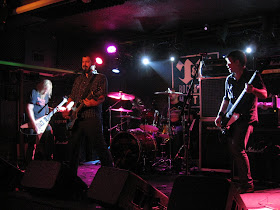 After a quick equipment swap out and sound check, Karma to Burn took the stage and with nary a word…proceeded to rock the fuck out for the next sixty minutes. Being no stranger to instrumental bands…I was left awestruck by how thoroughly entertained I was by this one. The trio didn't just get onstage and jam…they had something else…presence…emotion…they were electric onstage. Not once did I think to myself…"man these guys are good, but they could really use a singer."

Guitarist William Mecum stalked stage left throughout the band's set, at times staring off into the crowd, at others with his back to us as he jammed to his own amplifier. He even left the stage altogether at one point, setting up shop right in front of the folks down front. Rich Mullins camped out on the other side of the stage in a stance very much akin to nearly doing the splits as he ran up and down the frets of his bass, never losing the smile that was plastered on his grill all night long. You think he loves this shit? You're damn right he does. 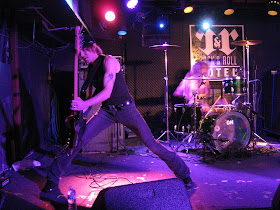 And that brings us to drummer Rob Oswald, who was a sweaty mess of hair and appendages all flailing around simultaneously. The man played like an absolute maniac beating the shit out of his kit so severely that the band took breaks after every other song to allow him to re-tighten his snare drum. In fact at one point as I held down my spot up front, I thought I felt something dripping on me from the ceiling…turns out it was wood shavings from Rob's drum sticks flying across the stage as he bashed his overhead cymbals…seriously. 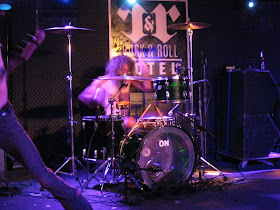 With their pummeling riffs and obvious love of their craft, Karma to Burn left quite an impression on the DC crowd. It was evident by the chants of "K to B" that echoed through the Rock & Roll Hotel long after the band had left the stage. But there would be no encore. Karma to Burn had said all they needed to say without actually saying a word at all. And with that, a very kick ass evening of rock and roll in Washington DC came to a very satisfying conclusion. 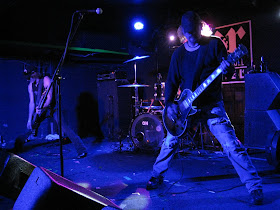