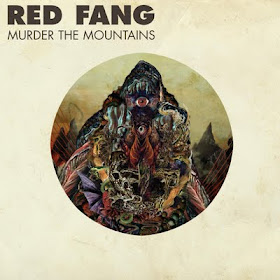 For my birthday, I wanted just two things: plenty of beer and plenty of LOUD. It's hard for me to crack open a PBR silo before I've rubbed my eyes into focus, but I had no problem putting on Red Fang's Murder the Mountains and waiting for the sun to ruin everything. You're not gonna find sludge on each of the album's ten tracks, but there's enough here to carry you through summer's end and get you ready to burn leaves as you scrape the tar from dad's filthy, moldy trashcans.

As far as sludge goes, Murder the Mountains may prove to be more accessible than we've grown used to. Balancing sludge with fuzz is nothing new, but doing so with an end product that keeps listeners from hitting "Eject" is no easy task. These ten tracks shift rhythms, styles, and influences so much, you could only assume the band is on meth. Well, finding a happy medium of Hamm's, High Life, and Tecate served these four Pacific Northwesterners well; they're able to transcend limitations and write songs you'll be using to get yourself laid.

You may immediately detect the influence of Melvins on Malverde, as the pacing and vocals are drop-heavy and sludgy without being too smelly. I can't imagine where lyrics like "I've been dyin' with the unclean people" have their inspiration, but they're enough to remove your pre-conceptions. Rumbling, plodding bass lose their spotlight to a metallic guitar that lifts and abruptly brings us back to Earth.

The clearest audition for Seth's Sunday Sludge lies in Throw Up, pairing sweaty toil with lazy, low-fi chops that construct the album's marquee hymn. Rolling, despondent, dusty... the track gives the finger to cacti and shifts to an up-tempo, machine-gun stumble. The sludge returns, but sirens and red flags stagger to the marriage of doom-drop and spooky gurgling fade-out. Number Thirteen begins with sub-cellar groove bass under soaring licks. Sludge undertones excel and grow proficient just under the disc's best vocals AND lyrics. Things get real interesting as the pot boils, buzzes, and commands your respect. Before a deliberate, understood, and effective fade, we're told "You're my everything." Sounds simple? I can't believe that.

The deliberate, Orange-Goblin-spat Into the Eye grinds, slows the album, and stays just pissed enough to hang around instead of driving home. The riffs, hovering above a deliberate and efficient sludge rhythm, punctuate the track with just enough filth to plod its way through wet leaves and embrace the sun's rays, though after coming up for air you'll immediately return to the pollution welcome by the song's opening.

Wires hops on a pogo-stick and denies our requests for oxygen, maintaining a fuzz groove that bounces between sequoias. A choppy, burly, static-laden buzz welcomes a channeling of Josh Homme, deliberate and almost choir-boyish in mood. You can almost hear an elevator cable snapping and sending four or five assholes to their deaths between doomish drops and a kick drum that makes friends with rattlesnakes for a spooky walk over crusty autumn leaves. The song is one of the album's highlights, with vocals totally contrasting those displayed on Malverde.

The bookend of the album's fuzz is captured on The Undertow, a low, slow trip through temperate drums and cosmic hassle. Placid vocals get flirtatious with the cosmos, relenting just in time to keep the track from pushing forward and screaming. Space-guitar warble lets things get out of control for just a moment before the chaos needs to be curbed.

Abandoning discussions on sludge and fuzz, we welcome the album's changing paces. Hank is Dead and Dirt Wizard maintain buzz without making you feel like you need a nap after Thanksgiving feast. The first finds a dusty pharaoh embracing Western culture and bathing in mud. He may discover Kyuss here as well, though he'll cut the track short, get high on space-guitar, and rape the cosmos with little regard for simulacra.

Dirt Wizard is the album's booziest three-minutes, sounding like a barrel-roll down a muddy hill. The vocals return to Buzz Osborne-style, though a steady stoner groove draws our hands into a quick-paced, haunting melody that slices past descending vocals. Slap a puddle, pick mud from your fingernails, and smack your four-eyed neighbor.

Painted Parade is nothing if not loaded with incredible drumwork. Paced by lightning and curbed by dispassionate grind, the track grasps titanium to break up rotting logs and blister untouched skin. John Sherman just might deserve a break after hitting these skins. Buy him a beer and shut your mouth, should you catch this track live. Human Herd holds the cleanest vocals on the album, not to mention the slick production and drive. Ambitious and steady, the stoner buzz lingers as we learn "We'll find a way to make you lie."

I felt like doing whatever the hell I wanted. I figured a band who did the same deserved to be highlighted. Red Fang have a clear understanding of the importance of balance; let's balance songwriting with life-writing, musicianship with fun. I can listen to Murder the Mountains and hear well over a dozen of my most rewarding life experiences without actually hearing about them on the news. Perhaps you can find the time to discover this album, avoid getting arrested, and smile with friends like you know something the rest of the world doesn't. Feels good, huh?