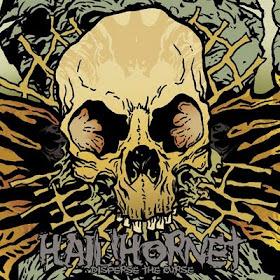 Do I really need to enumerate the credentials of Hail! Hornet's lineup? You'd expect the band to fall far short of adding up to the sum of its parts, but Hail! Hornet's second offering is far too filthy and far too heavy to dismiss. Featuring T-Roy Medlin (Sourvein), "Dixie" Dave Collins (Weedeater), Vince Burke (Beaten Back to Pure), and Erik Larson (Alabama Thunderpussy), Hail! Hornet coat Disperse the Curse with sticky sludge and throw in a snake's nest for added discomfort. These eleven tracks won't make your day any sunnier, and you may need to cozy up to 750 mL of Wild Turkey afterwards.

The band certainly succeeds in leaving behind any comparisons to the members' other endeavors, though the album's success lies in how diverse, proficient, and unhinged it sounds. Shoot the Pigs creeps in with doom, bongos, laughter, and an undeniable creep-factor. Vince shreds through an unsettling engine-gurgle until T-Roy decides he's done fuckin' around. Erik's drums paint a canvas that goes from drier than a bucket o' sand to completely doused in napalm. Then there's Dixie's bass; low, loose, and unmistakable all at once. You're only 4 1/2 minutes into the album and you already feel your face starting to swell.

Given their pedigree, you can certainly expect plenty of plodding grime from Hail! Hornet. What'll surprise listeners, though, is the breakneck speed present on much of this album. Gifted Horse is drunk, pissed, and running on dangerously high RPM's. The drums almost move too quickly for you to notice, but your head will bounce with every bass lick. Disperse the Curse is loaded with tempo shifts, moving from a car that won't start to steadily humming backwoods romps. The track is seemingly paranoid, complete with roller coaster guitars and growls spat through clenched teeth. If you're listening in your car, you may think you're being pelted with (*ahem*) hail until T-Roy channels Nick Oliveri and lets the mire sit a few seconds.

If the rattling bass, drum shifts, and twitchy snickering of Glass Roses sounds like something's wrong and getting worse, the burn of Beast of Bourbon provides 40-proof relief. Imagine having your jaw jacked on the playground when all you wanted was a spot on the kickball roster. Well, the choppy guitar and deadwood bass of this track rollick hard enough to make you say "uncle." The fever breaks, but not before Dixie's bass and Vince's guitar receive marquee-billing on respective solo crustiness.

Kill the Liars begins slow, distant, and more lumbering than a wet Clydesdale. T-Roy echoes his vocals mercilessly and hauntingly, with a groove picking up just in time for guitars to slice through intermittent lifts and pauses. The traditional metal licks of Unholy Foe lose out to ratchet drums and dragged-by-your-ass vocals. The drums relent long enough for a gathering around a bubbling cauldron, while the cymbals are more patient than they want to be.

Suicide Belt is where these burns start to blister. Drums punish, vocals screech and halt, and a down-tuned bass remains deliberately loose and lazy. Good luck keeping up with Hail! Hornet on this track. The slowed, creepy Dullards Creed follows, which is a lost, distant Brian Johnson drowning in a bog. Vocals battle and bounce off one another, yelling obscenities across a muddy swamp with plenty of fuzz added for an incredible dynamic. The drums of Scars will tug at your ears like firing pistols, while the track's guitars shave off more than you're willing to shed. The promised storm drops under a double kick drum that joins a roughneck, rumbling bass and ends way too soon.

These assholes decided to save the death march as the album's last track. Blacked Out in Broad Daylight is 8 1/2 minutes of disapproving doom, plodding on pitted vocals from a place unknown. This cement-hardened march to the gallows contains no apologies, and you never expected any. You're stranded in the woods, surrounded by eerie howls, perhaps hounds gnarling over bloody scraps. A choppy tempo casually grows slower, much slower, which couldn't have been easy for the band to maintain. The evil buzz hanging in the canopy allows the instrumentation to gather its thoughts and spit its final breath. You once thought Beast of Bourbon was the album's best track, but now you're not so sure.

What Hail! Hornet have done is created a sludge record that's faster than is normally allowed and heavier than is normally expected. From start to finish, Disperse the Curse picks you up from your piss-stained couch, throttles you from wall to wall, and tosses you into the back of a rusty F-150 for a spattered bonk through the timber. It's fast, it smells awful, and it sounds incredible. Don't let that term "super group" invade your skull. These four dudes are gonna bust through your preconceptions and cake your speakers with something you can't identify.