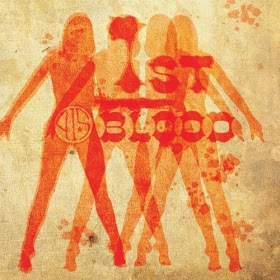 For most artists the "rock n' roll lifestyle" is far from the fairytale that most of us imagine it to be…in fact the music industry can be a real bitch. So that's what makes it truly special when you find that rare band who can look the rigors of said lifestyle straight in the eyes, throw their collective middle fingers to the sky and with smiles on their faces, brazenly kick out their jams for the simple reason that they fuckin' love ‘em. Brothers and sisters…91s are just such a band. And on their debut album First Blood, this trio of Pennsylvanians…Patrick Michael Reigel (guitars/bass/vocals), Robert Eugene Gallagher Jr (drums/vocals/Moog) and Addam Jacob Woolf (bass)...drop ten hits of psychedelic, stoner rock goodness that are guaranteed to show you one hell of a good time. Strap yourselves in…you're gonna love this one.

The briskly paced instrumental "Enter the E" blows open the doors of First Blood, sounding somewhere along the lines of Dick Dale if the king of surf guitar got his hands on a fuzz pedal and a whole bunch of weed. The track comes and goes so quickly that you won’t even realize you’re in the middle of a contact high when it ends. And then right around the time you hear a voice whisper “looking wicked”, 91s proceed to saturate your ears with the hazy groove and relentless swagger of “Haitian Lady”. Imagine Jimmy Hendrix fronting Fu Manchu and you’re in the right sonic neighborhood. With wonderfully sleazy lyrics and riffs thick enough you could chew on them...this is rock n’ roll…this is 91s!

But if I had to choose, I’d say that one of the next three songs would be my personal favorite from this record…you can take your pick…it changes day to day. The first of these is “Knows Our Name”, featuring some nice Iommi inspired guitar playing that teeters on heavy, yet never strays from that ultra chill 91s vibe. “Hold Out” starts with fret work that could best be described as antagonistic…it just fucks with you. Here the vocals join the guitar in a sort of duet until eventually all three instruments come together to unleash the finest groove yet on First Blood. And once the band reaches the climax of this tale about a drug deal gone bad (“keep running and running…hold out…he held out”), sitting still is no longer an option. “War Hammer” is the last of the three, and sounds kind of like the Black Crowes doing stoner rock. Here the band is actually doing you a favor as they sprinkle just enough funk into the mix to make sure your lady friend can move her ass to 91s too.

Gallagher’s Moog synthesizer opens “Blue Skirt Demon” with noises more akin to an 80’s arcade than the organic, bluesy romp that the song becomes and he wastes no time getting back to his oversized bass drum and crash cymbals once it does. In this one, we hear background vocals crooning right alongside the song's chord progressions and the chorus of "blue skirt demon…hold me close…keep me till the end". Reigel’s guitar playing should be noted again here as his fingers get downright agile running up and down the frets. “Amazon Panther” keeps the bluesy vibe, but puts on a showcase of 91s' funkier side…kind of a devilishly, rock n' roll version of Parliament/Funkadelic.

“Rumble Weed” opens with an appropriately rumbling bass line from Woolf that is joined by a loose guitar lick and vocal musings about deserts, creation and existence before Reigel shoves a propulsive riff right in your face and all three 91s begin to chant “we won’t die”…it doesn’t get much cooler than this. “Thick Air”, the last proper song on First Blood, is an oh so appropriately titled groove featuring enough heavy fuzz and “thick” riffage to give you a serious case of cotton mouth…you’ll feel like you’ve been chewing on a cloud. And just like that, the album comes to a close with a brief reprise of the chaotic intro, this time dubbed “Exit the E”.

So now that you've heard a little bit about their debut album, you think you're ready to have a little fun with 91s? You see, these guys are like that friend from back in the day who always seemed to get you into trouble…you know…the bad influence who got you into even worse shit. But the thing is, you never stopped hanging with that dude because he was just too much fun. Well I'm here to tell you, listening to 91s is kind of like that. It's music that'll aid and abet you in all the bad shit you were probably gonna do anyway…but at least you'll feel good about doing it.