Album Review - Using Bridge: And I Will Be Heard 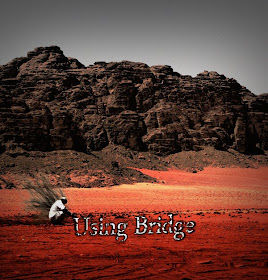 Are you a fan of the grunge revolution that exploded out of Seattle in the early 90's? Do you think Pearl Jam was all downhill after Ten? Does Badmotorfinger have over 1,000 plays on your mp3 player? If you answered yes to any of those questions, then chances are you are going to love Using Bridge.

The band hails from Rimini, Italy, which may be a far cry from the Pacific Northwest in terms of geography, but when it comes to musical influences, there's no doubt about where these guys' allegiances lie. Vocalist /bassist Manuel Ottaviani, guitarists Federico Arcangeli and Simone Antonelli and drummer Marco Lupo have created an album that is unabashed in its worship of all things grunge. But unlike most of the "post-grunge" radio rock shit we get force fed these days, Using Bridge is a throwback to the true essence of what made that scene so exciting, so vibrant…so damn unpredictable some 20 years ago.

Take the album opener “Black Rebel” for example. The song takes a page straight out of the Bleach-era Nirvana playbook with roots lying somewhere between the pile driving riffs of metal and the sloppy, garage aesthetics of punk. The dual guitars of Arcangeli and Antonelli (here forth known as the two A’s) each take a side as one churns out the song’s ultra heavy rhythm, while the other loosely meanders his way through a series of ear shredding solos. The song is simple, loud, abrasive and wonderfully obnoxious.

“Sick and Sober” on the other hand is a much more scaled back affair, featuring acoustic guitars, beautiful harmonies and a chorus that could easily find a home on any of those aforementioned rock radio stations…if they had the balls to play something this honest and real. This one is the first to showcase Ottaviani’s incredible vocal range as he alternates between a warbling, Vedder-esque baritone and a screaming falsetto similar to that of Chris Cornell, giving the song a remarkably Temple of the Dog-like sound to it. The two A’s continue their stellar guitar interplay, one strumming while the other noodles away into oblivion and both Ottaviani, who doubles as the band’s bassist, and Lupo drive the song forward with their steady rhythmic backbone.

“Not Like You Know” raises the intensity and the angst as Ottaviani implores “why do you always tell me that I have to be someone?” And its followed by the perfectly titled “One Minute to Go”, which clocks in at…you guessed it…one minute, and is a simple, bombastic, loud-as-hell blast of garage rock that calls to mind the early 00’s punk revitalization that spawned bands like The Vines, The Hives, et.al. “Too Fast” follows right on its heels with a funky bass line and playful guitar part that ultimately transitions into a sort of heavy blues rock jam.

It’s this point in the album, where Using Bridge really begins to showcase their true sound, which owes a lot to early Pearl Jam with the use of the bluesy rhythm/lead guitar duo combined with Ottaviani’s dramatic vocal style. One listen to “Drop”…my personal favorite track on the album…and you’ll feel like you’ve been transported to Seattle circa 1993. “In You” continues that trend, with the vocalist crooning over the top of an aggressively strummed acoustic guitar, singing “please let me die for one last time…I can die for one last night”. The song, which is exceptional by itself, serves as a companion piece with the electrified “In Me”, the lyrics of which continue the misery and self-deprecation of its predecessor as Ottaviani laments “feels so empty in me”.

“Fire” sees the band returning to the explosive simplicity of early Nirvana…their credo here seemingly…play loud and play fast. And to take nothing away from the steady rhythm section of Ottaviani’s bass and Lupo’s drums, the two A’s just own this song with their guitar work…simultaneously matching the groove laid down by their band mates while chaotically soloing through any open space they can find in the song. The sincerity of “Only For My Eyes”, a true alt-rock ballad, scales the musical intensity back but keeps the emotional outpour alive with the lyrics,”I’ve tried my best, to make you mad”. Using Bridge isn’t finished though, as their next song is a stunning cover of the Rolling Stones’ “Gimme Shelter”…psst, don’t tell anyone…I like it better than the original. And then the band closes with “Polvere e Cenere” (Dust and Ashes), the only song in which Ottaviani sings in his native Italian and one hell of a conclusion to an exceptional album.

And I Will Be Heard may not start the next music revolution, but it is in fact a true and honest representation of a genre that has been oversaturated and diminished by pretenders for far too long. Using Bridge has resurrected the combination of stellar musicianship and emotionally sincere lyrics that once defined this style of rock music and truly made it an “alternative” to the mainstream. They took their obvious influences and honed them into one of the more cohesive, consistent and damn catchy alt-rock albums that I’ve heard in some time. If you enjoyed the sounds of the 90’s and want to hear a band that manages to bring a little integrity back to the style, then this album is not to be missed.