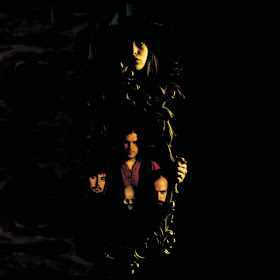 If a modern take on William Shakespeare’s A Midsummer Night’s Dream was ever written, Blood Ceremony’s Living with the Ancients could easily be its soundtrack. On their latest Rise Above Records release, the Toronto band creates a macabre blend of folk, doom and psychedelia that sounds like it could have been made by the mischievous fairies, elves and other supernatural creatures that inhabit the play’s forest. Of course the primary reasons for such a comparison are the haunting vocals and rustic flute playing of Alia O’Brien. The songs have a mystical aura that conjures up images of Puck, the devilish, Pan-like sprite from the story who had the legs, cloven hooves and horns of a goat.

How appropriate then that the album begins with “The Great God Pan”, a song about a ritualistic séance to resurrect the mysterious pagan figure. The track features a combination of driving doom riffs and supernatural lyrical flourishes before O’Brien’s organ takes center stage and then she and her band mates, guitarist Sean Kennedy, bassist Lucas Gadke and drummer Andrew Haust, go on an extended retro-style jam that lasts for nearly five minutes. This gives way to “Coven Tree”, where we first hear the aforementioned flute. The song has a very 60’s vibe to it, sounding kind of like a fresh take on The Mamas and The Papas. In fact O’Brien’s vocals often remind me a lot of the legendary Cass Elliot from that band. This one keeps the creepy mysticism alive with lyrics about a gathering of witches.

“The Hermit” is a beautiful, folk-rock transition piece that sees the band strumming and grooving around a whimsical flute solo by O’Brien. And then Blood Ceremony gets down and dirty, losing the flute in favor of the weightier organ as they unleash the Sabbath inspired dirge, “My Demon Brother”, definitely one of the heavier tracks on Living with the Ancients. The flute resurfaces amidst the catchy, up-tempo groove that starts off “Morning of the Magicians”. Here, O’Brien’s vocals take on an ethereal quality, particularly during the mid-song breakdown that features another of the singer’s stunning flute solos intertwined with some intricate acoustic guitar plucking by Kennedy. The two are eventually rejoined by the rhythm section of Gadke and Haust and the band picks right back up with the up-tempo groove that started this masterpiece…perfection.

“Oliver Haddo” is a straight forward, riff-driven doom number about a character from the 1908 novel The Magician that is apparently based on Aleister Crowley. Around six minutes into the song, O’Brien and Kennedy enter into an impressive jam session that recalls prog-metal giants Mastodon, if they had replaced one of their guitars with an organ. “Night of Augury” is a definite throwback to the 60’s as it features more of O’Brien’s organ grinding as well as what is perhaps her strongest vocal performance on the album. “The Witch’s Dance” is another brief interlude that features the flute with an acoustic guitar accompaniment and ultimately leads us to Blood Ceremony’s final act, “Daughter of the Sun”. On this one, the band seems to have saved their best for last, incorporating all of the elements that make Living with the Ancients such a fantastic listen, into an epic ten minute finale. The song shifts from hard driving riffs through fantastical sweeps of flute and guitar into organ laced jams and back again, all while maintaining the eerie vibe that permeates the entire record.

On Living with the Ancients, Blood Ceremony have created a vibe…a strange sense of supernatural evil that never quite leaves you as you listen to it. The greatest albums do this…they create a feeling or some sense of emotion that courses through them from one song to the next. The difference here is that it isn’t just the subject matter that lends to the album’s atmosphere…it’s the band’s choice of instruments. The flute has long been associated with devilish spirits like the Greek god Pan and Shakespeare’s Puck. So here’s my recommendation to you. Turn down the lights…fire up the candles and incense…and join in this Blood Ceremony. Who knows…maybe the séance will work and the ancient satyr himself will appear right there in your living room.