New Band To Burn One To - JP & The Jackrollers 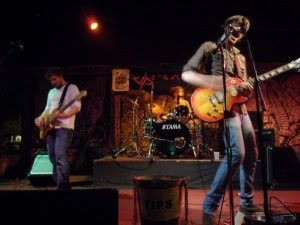 As Also seen on The Soda Shop
Today's New Band To Burn One To is JP & The Jackrollers.


JP & The Jackrollers is a rock power trio formed by Jeff Pruitt(Guitars, Lead Vocals) & Steve Eleogram(Bass) in Feb. 2010. After deciding to stop playing in cover bands and start performing their own material, the two formed a duo. They went through a few percussionists but they were able to find a fit in Kevin Carpenter(Drums) straight from Nawlins, LA. This high-intensity 3-piece based in Memphis, TN will put a show on for you that you will never forget. Their songs range from psychedelic groove based jams to heavy, high-energy, fast-as-hell Rock N' Roll. When asked about the bands sound, one fan was noted as saying "its like end of the world shit, no doubt". The Jackrollers cut their first record "Decapitated Blues" in the Music + Arts Studio in Archer Records and are currently preparing to start on their next effort. They are gigging heavily and constantly writing new material for their newest
record which should debut by the end of summer 2011, prepare thyself.

These guys have a good sound going on ranging from bluesy rock to hard rock and even some more mellow tunes. Nice and relaxing to pop a cold one, light a fat one and chill out for awhile.