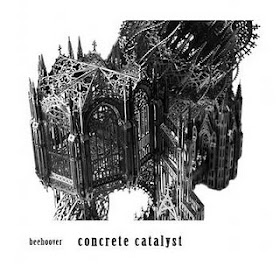 Before I get started, I need to fill you guys in on something. I want to make it understood that when I receive an album for review, I would estimate that nearly 95% of the time, I have no prior knowledge of the band I’m hearing…that is to say in almost every case…I’ve never heard of them. Furthermore, I typically make it a point to avoid reading anyone else’s thoughts or opinions about an album before I’ve given it a listen myself. You see, I don’t want any outside influences on my own impressions. I don’t want to go in with the presumption that an album is supposed to be “amazing”…or by contrast…that it’s supposed to “suck”. For my reviews, I and I alone will be the judge of that.

So why am I telling you all of this? Because in the case of Beehoover’s Concrete Catalyst, I went in with a completely blank slate, having no idea what to expect and came away with an entirely new perspective on how music is created. These guys literally made me re-think all that I thought I knew about heavy music…or music in general for that matter. Now admittedly, those are some pretty big statements and I can understand a little skepticism from those who may be uninformed. I’ll do my best to explain…

“Oceanriver” is our first glimpse into the eclectically quirky and insanely heavy world of Beehoover from Esslingen, Germany. This track alone will introduce you to the band’s off-tempo drumming, their love of dissonance and their use of guitar chords and harmonies that aren’t really guitar chords and harmonies at all. You see, that’s where Beehoover is a little different…this “band” is actually only two guys, Ingmar Petersen (vocals/bass) and Claus-Peter Hamisch (drums/vocals). And Petersen seems to have a way of making the bass guitar do things that I didn’t realize the instrument was capable of doing. In fact, as I listened to Concrete Catalyst, I kept returning to the band’s website to double and triple check that I hadn’t missed the fact that another instrument was being played…particularly a guitar. But alas…with the exception of the subtle acoustic guitar on the intro to “Rocking Chair” and the ballad “Wilde Geese Yell” (which shows up about three quarters of the way through the album and features Petersen crooning over an ominous backdrop of thunder and rain), Beehoover is all drum and bass.

But before you go accusing them of being some low and slow one trick pony…hold up just one second. I defy you to sit still while listening to tracks like “Five Minutes of Resistance”, “Sultana” or “Counted is Bygone”! And by the way…tell me you don’t hear a guitar in there…I simply cannot believe all that noise is being created by a bass! There is so much going on in this music it is almost indescribable. From the contagiously, heavy grooves to the discordant interludes to the twisted poetry of Petersen’s lyrics, this is something altogether different…like catchy post-metal, for lack of a better description.

And speaking of Petersen, how have I made it this far without mentioning the man’s vocals? Throughout Concrete Catalyst, you’ll hear a fascinating amalgamation of Serj Tankian meets Mike Patton from the over-the-top, operatic notes to the high pitched screams…right down to the occasional growl of the guttural variety. Or how about on "The Dragonfighter", where believe it or not, the vocals bear a striking resemblance to Tenacious D…except unlike that comedic duo, Petersen is absolutely serious when he sings "feel my sword, oh mighty beast"…twelve sided dice not included.

So getting back to my original point with this review, Beehoover’s latest record has made me completely rethink music. You see, I contend that if these two guys are capable of making an album this explosive, this heavy, this original and perhaps most importantly, this contagious with only a bass guitar and a set of drums…then what the hell is everyone else out there doing? Shame on you lazy ass power-trios…padding your sound with that unnecessary guitar. And don’t even get me started if you have more than three members “overcrowding” your band.

I'm obviously joking a little bit here, but honestly, this duo has just upped the ante…thrown down the gauntlet…set the bar at a new level…pick whichever cliché you wish. The bottom line is that Concrete Catalyst is an album that sounds incredibly fresh to my ears. It isn’t everyday that you discover a piece of music with this kind of talent and originality on display. Seriously folks…I think it would behoove you to check out Beehoover…c'mon, you knew that was coming.