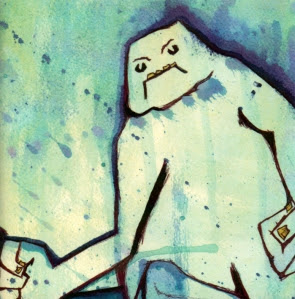 As also seen on The Soda Shop
These guys were the very first New Band To Burn One to that I wrote about. They are Indianapolis' own Goliathon. Their debut album, Without further Ado is one strong album. Actually that's a bit of an understatement. It's pretty fucking good, stoned, drunk or sober. The sound is stoner and classic rock with jazz and blues elements. The album flows nicely from the first track to the last. There's no big gaps, just one continuous flow. Singer Chris Probasco has a voice similar to a harder rocking Chris Robinson.

The album opens with "Juqus Harpus' which is a cool classic rock number with a few guitar solos and instrumentals. It rolls right into the next song, "Justice is Blind."
"Panhandled" is next which starts off a bit slow and then picks up some steam. It's a bit doomier than the previous but without the doom. There's some fine guitar soloing as well. "Self Reflection" is a bit mellower and this is where the jazz comes in. Chris Probasco plays saxophone as well and is implemented throughout the song. The last song is an epic 17 minute masterpiece broken down into 5 different sections. The song is "Negligent Senescence." It starts off bluesy in a Clutch like way, that's the Overture. Chris comes in with his harping vocals then it's on. The sax comes in again for a bit. At about the 10 minute mark it slows down to where you think it's almost over. Then the organ creeps in and you're in for some more awesome guitar work. The 14 minute mark it picks up fast again.

After hearing the band's demo on their Myspace earlier in the year (which are sorely missed by mu-ah), I knew these guys were capable of putting out something great. This is a great, no, a fan-fucking-tastic debut album. It's epic, hard, heavy and kicks ass. Throughout the album I couldn't help but think I heard some influences such as Led Zeppelin, Robin Trower, Lynyrd Skynyrd, Clutch and even The Black Crowes. Copy cats though, these guys are not. This is 100% original rock. They're not a clone of band A or band B. If you're looking for something fresh , Goliathon is the band you MUST check out!