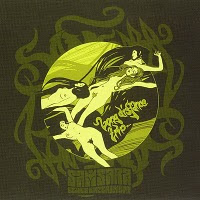 Also seen on The Klepto's Guide

I'm just finishing up Samsara Blues Experiment's debut (after a couple of demos) album, Long Distance Trip, and I'm pretty impressed. The album is only made up of six songs, but it lasts over an hour, so you can imagine. This album isn't all long songs though (if you hate a track over 10 min - not me), two are a little over four minutes long, one in nine, two are around twelve minutes, but the ending track is damn close to half of a hour (twenty-three minutes) long - as I haven't finished the album yet, I can't say if it is actually twenty-three minutes, or if it ten minutes followed by ten of silence then onto a 'hidden track.' God I hope not, one of these days I need to write an article about my disdain for these so-called 'hidden tracks' and their uselessness in the current age of music....but another time.

Anyway, as I said Long Distance Trip is a mix of long, psychedelic-leaden, songs and their more straight-forward, shorter counterparts. The best songs are the psychedelic minefields of "Singata Mystic Queen," "Center of The Sun," and "Double Freedom" because they focus more on the music, how it churns, grows, and evolves. While the song "For The Lost Souls" is their most straight forward track ("Army of Ignorance" and "Wheel of Life" are instrumentals, something the group does quite well), the singer's voice gets to me. Throughout the album the vocals are hard to distinguish from the rest of the instruments, I don't know if by design or not, but for "For The Lost Souls" it takes away from the overall song. Now don't get me wrong, for some of the songs it works really well, but that is exclusive to the multi-layered/focused songs (especially in "Double Freedom"), mostly because the lyrics take a second-seat to the music, only being heard once every five minutes or longer; minimal lyrics.

I want to hear more from Samsara Blues Experiment, and I await their next release with fevered anticipation. They pull off psychedelia like kings from the 70s - something that very few bands can claim - but don't do the straight-forward rock very well. If they play to their strong suits, their next release should be four tracks of undulating sonic gold. Play to your strengths guys!

Oh as a PS/BTW, the last song, "Double Freedom," the song of monumental proportions, is a full track. A full twenty-three minutes of blissful trip-rock. Worth the listen.