New Band To Burn One To - Powerhead 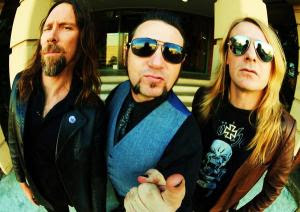 As Also seen on The Soda Shop

Today's New Band To Burn One To is Powerhead. They are from Australia. Their style is a down and dirty stoner rock. Very cool indeed.Their latest album is called Celestial Frankenstein and it's a monster. Their sound is a bit of hard rock and stoner.


Stoner Rockers POWERHEAD have been kickin' around the Sydney underground for a few years, living up a reputation for fun live shows, and sheer heaviness. Starting off in a more Rock'n'Roll Stoner direction the sound has developed into a grinding, doom laden, down tuned, progressive onslaught while retaining a sense of Melody and song.

POWERHEAD have released one demo and an EP- "Shadow of the Thunderchief" a good recording reflecting the band a few years ago, but now the guys have completed a new Slab, the epic "Celestial Frankenstein" Recording and production was handled by Anthony to reflect the bands true sound of heaviness and intensity. Celestial Frankenstein is now available at iTunes, eMusic, Amazon and Napster.

So If you are sick of glammy mamby pamby indie lightweights, Or the false posturing of nu-metal and you yearn for big sludging riffs with cerebral headtrips that pay hommage to the past, but in no way get stuck in it. Then check out POWERHEAD at their next gig.....we aim to please yo assssss!!!