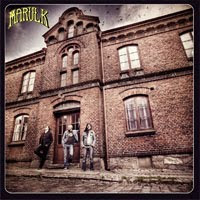 Take vintage 70’s Blue Cheer and throw it in the blender with the funky riffs of “Jam Room” era Clutch and you’ll have an idea of what Marulk are all about. The band, which features Danne Palm on vocals and bass, Thomas Jäger on guitar and Esben Willems on drums, takes their name from the Swedish word for the angler fish, which is rather appropriately, at least for this music, also known as the sea devil. On their self-titled, Transubstans Records debut, the Gothenburg, Sweden trio have crafted nine tracks of retro-stoner rock n’ roll boogie that is sure to get a few heads bobbin’.

The listener is introduced to Marulk with album opener “Daylight & Rain”, a straightforward rocker that mixes classic and stoner rock styles to perfection. It’s followed up by “Följer Ett Spår”, which continues in that same vane, but unfortunately sounds out of place here, if for no other reason than it’s the only one of the bunch that isn’t sung in English. The band recovers with “Hey Sister”, a bluesy little number with a catchy sing-along chorus, followed by “The Alarm”, which sounds like a mash-up of Clutch with fellow Swedes, Witchcraft. Both songs feature impressive fretwork by Jäger.

The album’s midpoint finds Marulk detouring from the guitar driven, blues rock of the first four tracks, into a trippy, folksy, acoustic number called “Is This Home?” that pays homage to slower Zeppelin fare, like “Tangerine” and “Going to California”. Upon first listen, I was concerned that this song could derail the cohesiveness of the album, but it’s actually one of the highlights in my mind. I can just imagine this catchy number being a foot stomping, sing-along favorite at live shows, with the crowd reciting right along with Palm as he croons “last thing I remember is the empty eyes of goodbye”.

Speaking of highlights, the strangely titled “Nosferatools” kicks off the second half of the album and seems to be the song that best personifies Marulk’s sound. The track finds the band building on a killer AC/DC-like, blues rock riff before down shifting into a nasty stoner-funk parade. In fact, the first half of the song is a fast paced rock n’ roll shit kicker that completely transforms somewhere in the middle to become a slowed down, gut rattling riff rocker and finally comes to a close with the mellow strumming of an acoustic guitar and Palm lamenting “I’m stuck in relentless…I’m stuck in an unstoppable mode…I’m grinding on…you know it’s never ending…and I’m moving on”.

Marulk wastes no time kicking the pace back into high gear with another up-tempo rocker called “I See You in My Dreams”, before really taking things to a new level with the final two tracks on the album. The first of the two, “Slumber Waltz” takes on a much darker, heavier sound, leaving the classic rock realm altogether and veering dangerously close to doom territory. At the risk of offending all that is unholy, I dare say that this song would fit comfortably alongside anything by Ozzy era Black Sabbath. And the final track, “Potemkin” becomes a raging freak-out that actually incorporates elements of punk as Jäger’s riffs go from bluesy swagger to a sassy solo that might feel at home on a Social Distortion record as Palm insists over and over, “we gotta get back to the Motor City”.

By incorporating so many different styles into the span of just over a half hour, it’s no surprise that Marulk’s self-titled debut can at times seem a bit disjointed. With that said, it is without a doubt worthy of a listen, both for fans of old school, guitar driven classic rock and for those who enjoy the funkier side of the stoner movement. I look forward to seeing where this band will go from here with their self-described “new school boogie”. Give these guys a listen and see for yourself.