The Warlocks Announce New Album, "The Mirror Explodes," Out May 19th On Tee Pee Records!

They came out of the late 90s neo-psychedelic scene, along with awesome bands Black Rebel Motorcycle Club, Brian Jonestown Massacre, and the Dandy Warhols. Each of their albums are different in sound and approach (due to their lineup, which fluctuates from as few as four to as many as ten), while at the same time maintaining a singular sound that is uniquely their own. - Brooklyn Vegan

...hypnotic, fuzzed-up drone-rock... sweet-sounding, rotten-hearted 60s pop... over the top and steadfastly retro, but in a good way. - Blender Magazine

Time is neither constant nor concrete. Its made of color and shade. Time flows, blurs and fades into the dim morning light. Time melts. And THE WARLOCKS are the ecstatic, hazy, foreboding, holy tick-tock of time that isnt anything at all.

For five albums, The Warlocks have lived between and beyond the minutes and hours of time. Sway to The Warlocks live and loud and songs will drift and envelop each other like the fog. Listen to the records and youll hear soundtracks to fuzz-freaked, bacchanalian stomps, pre-dawn city prowls, sleeping late with new crushes, and the elation and exhaustion that washes in and recede deep into the wee hours.

The Warlocks new LP, The Mirror Explodes, speaks and whispers from all of these places. But where the bands last long player, Heavy Deavy Skull Lover, tweaked time in an icy-cool, white-noise swirl that evoked a decadent lysergic night, The Mirror Explodes is disorientation through a longer lens pictures of luck, longing, losing, moods and fever dreams scrambled in the haze of near and distant memory.

On the 8 songs of The Mirror Explodes, the bands signature amalgam of White Light/White Heat attack; space panoramas, fuzz, melancholy, and melody is present and potent. But there is a vivid focus too. Throbbing bass lines, distant rolling thunder drums, and zombie rattlesnake shake are a heartbeat of strange, ominous vitality. Guitars howl, slash and bounce like light. Bobby Heckshers vocals sound oddly alone and unsettlingly intimate all at once. And just when you think you understand the sum of these sonic elements, they become something else entirely.

* The Mirror Explodes was produced and recorded by Rod Cervera (Weezer, The Rentals) at Clear Lake Studios, Mastered by JJ Golden at Golden Mastering. Listen to track 1, "Red Camera" off the band's new album below. 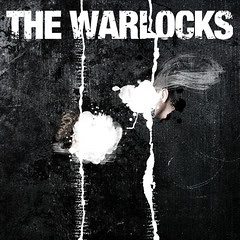 01. Red Camera
02. The Midnight Sun
03. Slowly Disappearing
04. There Is A Formula To Your Despair
05. Standing Between The Lovers Of Hell
06. You Make Me Wait
07. Frequency Meltdown
08. Static Eyes

Red Camera In A Red State (The Warlocks @ SXSW)