Legendary Swedish doom metallers CANDLEMASS have completed work on their new album for an early 2009 release.

Commented bassist/songwriter Leif Edling: "We've worked on [the CD] all autumn and it feels really good that it is completed. The sound is superfat, heavy as hell, and very organic/dynamic at the same time. Our friend Chris [Laney; RANDY PIPER, ZAN CLAN] has done a great job mixing it!! I personally think this album is the best one of the three we have released in the new millennium, easy!! It is bigger, better, louder and a bit more mature, I must say!! It is our 'Heaven And Hell', hehe. And if you guys behave and eat your vegetables, we just might be able to add a couple of sound bits on the C-MASS site. Maybe the wait for the release in May next year will be easier. Check this page sometime before X-mas. The only thing that pisses me off is the fact that we can't call it 'Hammer Of Doom', after one of the songs on it. A brand new stupid festival in Germany calls themselves that! Who spilled the beans??? Well, well… the album absolutely KILLS and we will surely come up with a suitable name for it."

Fan-filmed video footage of CANDLEMASS performing at the Sweden Rock Cruise, which was held October 9-10, can be viewed below (clips uploaded by "blackopalrough").

CANDLEMASS has been confirmed for next year's Bloodstock Open Air festival, set to take place August 14-16, 2009 at Catton Hall in Derbyshire, England.

"Lucifer Rising", the new EP from CANDLEMASS, in October entered the Greek International Repertoire Chart at position No. 31.

"Lucifer Rising" includes two brand new tracks — "Lucifer Rising" and "The White God" — plus re-recorded version of "Demon's Gate" live in the studio. As a bonus, you get an audio recording of most of last year's gig from Athens, Greece: "At The Gallows End", "Solitude", "Emperor Of The Void", "Devil Seed", "Under The Oak", "Mirror Mirror", "Of Stars And Smoke", "Black Dwarf" and "Samarithan".

CANDLEMASS, mixer Chris Laney and other studio personnel at Polar studios in Stockholm: 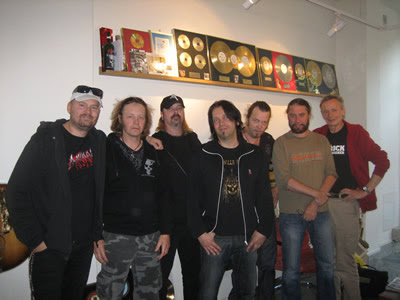