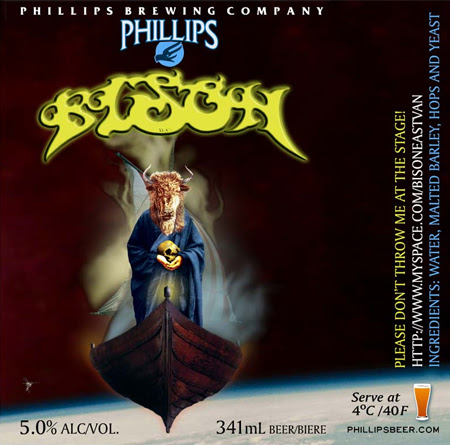 Vancouver, British Columbia, Canada-based act BISON B.C. is getting what every band dreams of — a custom beer! For one night only, Bison Beer will be served when the band joins the bill at the former Storyeum building (151 Cordova Street) in Vancouver tonight (Friday, December 5) as part of the Transmission Conference.

According to Matt Phillips, CEO of Victoria's Phillips Brewing Company, it was producer Tyl van Toorn's idea. "I don't know how serious it was," Phillips told Straight.com, "but I guess there were some negotiations going on to get them to play, and Tyl said, 'We'll get a beer done for you.'"

Phillips said that the company is producing "about 30 dozen cases" of Bison Beer, but wouldn't say how many were going straight to singer-guitarist James Farwell and his cohorts. "There's some stuff that I just don't know if I can disclose," he told Straight.com.

Commented the band: "We wanna say a huge thanks to our bros over at Phillips Brewery on Vancouver Island for making a dream come true. We think this is pretty fucking rad."
RegR at 11:38:00 AM
Share