The Album Of The Day is the US version of "Rise And Fall" by The Warlocks. 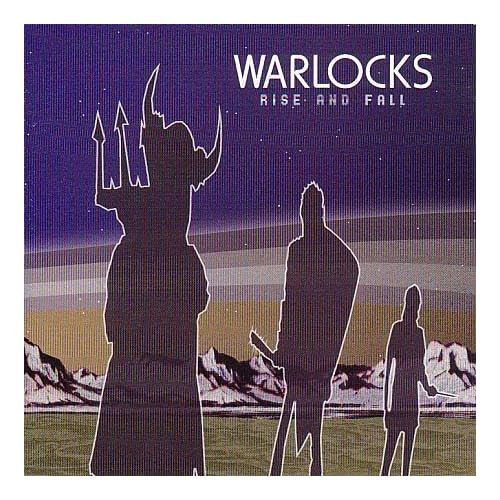 This nine-member group -- which includes two drummers and four guitarists -- often focuses heavily on dark, amphetamine-fueled hard rock skree and titanic singular-riff freakouts (the jagged, sawtooth guitars of the Velvet Underground's "Sister Ray" seem to be a huge influence). What's surprising, however, is that Rise and Fall kicks off and nearly reaches its apogee with the first track, "Jam of the Witches," which clocks in at nearly 15 minutes (and more than twice the length of a similarly titled "Jam of the Warlocks" from their eponymous Bomp EP). This first-take troglodyte rock juggernaut seems like it might be out of place in the sequence, but what follows isn't even remotely anti-climatic. In fact, there are a few surprises to put things back on track, including a handful of stonier ballads that wouldn't have sounded too out of place on any Pink Floyd album pre-Dark Side of the Moon. "House of Glass," one of leader/guitarist Bobby Hecksher's better vocal efforts, is a pastoral acoustic-strummed reverie (think David Gilmour's "Fat Old Sun" from Atom Heart Mother or those shambolic country-rock instros that Pink Floyd contributed to the Zabriskie Point soundtrack). A cleaner re-recording of "Song for Nico"(a rougher version appears on the band's EP) has a fuzz-soaked "Heroin"-esque vibe and comes off as a reverent tribute to the enigmatic chanteuse. A swaying stoner's waltz, "Motorcycles," lopes along nicely too. Then, after a surreptitious chunk of dead space amid a bit of guitar tuning and crowd chatter, a final lengthy jam ("Heavy Bomber") kicks in, but the spacier Spiritualized-sounding instro ultimately drifts along without going anywhere. The last track listed on the tray card, "Laser Beam," doesn't actually appear on the CD. Surely it's Hecksher's amusing way of perplexing anyone who attempts to find it buried somewhere. All in all, the Warlocks' first full-length is a solid effort from one of L.A.'s best live acts. After this release, the Warlocks signed with the Birdman record label. (Bryan Thomas, All Music Guide)