The Album Of The Day is "II:Crush The Insects" by Reverend Bizarre. 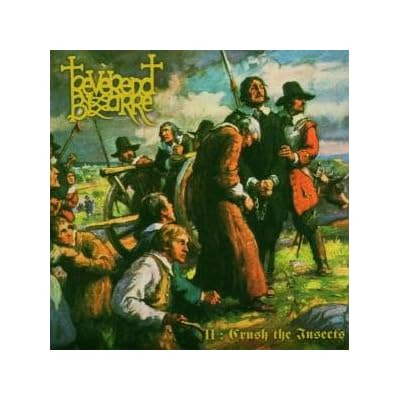 "Reverend Bizarre seem to be having quite a bit of fun here," is what I observed upon hearing the first few tracks of this new record. The band had jokingly commented prior to its release that this would be a more "commercial" album, and well, they were almost right!

But damn me if it isn't really addictive and fantastic metal. Yes, they've always had some upbeat sections sprinkled conservatively through the trudge and gloom of their usual fare, but it seems as though they've learned to "rock out" on this release. Maybe they've just upped their alcohol intake, or perhaps they've been listening to more Witchfinder General and mid-period Cathedral, but whatever the case, the first three tracks on 'Crush the Insects' are not lumbering and plodding monstrosities, but instead rather bouncy and catchy affairs. Make no mistake though, the pounding rhythms and drony Sabbath-inspired riffing will leave no doubt in anybody's mind that this is still doom metal; just perhaps of a less downtrodden and almost celebratory sort. I admit though, that after the third "rockin" track, I was starting to get just a little bit worried, not because I wasn't enjoying what I was hearing, but because a Reverend without the damnable gloom just didn't seem right.

Luckily, my fears were quickly allayed as soon as "Slave to Satan" slowly crawled and wormed its way into my cranium, for it is a mammoth of a track, and about as dooooooooooooom as it is possible to get, its ponderous chording and subtle use of guitar harmony reminding me more than a little of 'Forest of Equilibrium'. I mentioned Cathedral earlier, as well, and this is no coincidence, for it seems that the Reverend may be evolving in a similar way to the British doom giants. Whereas one could liken their previous output somewhat to the early Cathedral era, 'Crush the Insects' is to the Reverend what 'The Ethereal Mirror' was to Cathedral. This means that although there are some puzzlingly happy sounding bits, they're still tempered with a healthy amount of sludge.

And really, one shouldn't turn their nose up at a band who can loosen up a bit and crank up the tempo a notch after downing a few shots-worth of Finlandia. For Albert's bass is still a thick wall of unstoppable force, and Earl of Void's drums are still as charismatic as ever, even if I seem to detect some simplistic sloppiness that seems properly injected to further the atmosphere of depraved rock n roll the tracks up to and including "Cromwel" generate. "Doom over the World" starts out the album with a crawling, ominous introduction before Peter Vicars' guitar leads in with the main, stolidly mid-paced and loping gait of the song. This one actually makes me think a little of Goat Horn, a band local to my area which I know Reverend Bizarre are fans of. It's catchy, simple, with a steady marching pace, and...a gang chorus!!! In a doom song? Yep, it's true, and it sounds excellent! The ending is a little strange as the band seems to pay homage to Deep Purple's "A Child in Time" with all the noise and out of control high-pitched shrieking, followed by some bizarre mucking about that serves no purpose but luckily only lasts for about forty seconds. "The Devil Rides Out" and "Cromwel" make me think of Witchfinder General as they tell their gleeful tales of satanic sabbaths and excess. Both these songs are too catchy and infectious to have a right to exist, and I certainly can't see why someone wouldn't enjoy them.

While the first three tracks describe the glee of apocalypse and of the abandonment of a soul to the devil, "Slave to Satan" marks the turning point into despair and agony. It also signifies Reverend Bizarre's return to *true* doom and paradoxically is where the album becomes a bit more experimental in other ways. "By This Axe I Rule!", based on the works of Robert E. Howard, is very possibly my favourite track on this disc. It starts out with a brilliant dirge played on bass and guitar, with Master Albert's deep, sonorous and occasionally very haunting and emotive vocals taking centre stage as they tell the tale of the barbarian and his lust for both Death and Life. The drums soon join in, and the song winds its way through some passages that will reduce most listeners to dust with their elephantine wait. Then we get the Reverend's tribute to black metal, which seems to surface on nearly every release of theirs in one form or another. This one sounds fairly Norse inspired and takes place at a loping tempo. There are some decent leads placed throughout this section of the song, and the vocals are clean and exuberant, which provides an interesting contrast since I could completely imagine Albert using harsh screams for this bit. This will definitely make you feel the power of the Barbarian King as he rides his stallion into the hunt, bloodlust in his eyes and gore dripping from his axe. Then we get an abrupt descent into a slow maelstrom of chords and feedback and harsh vocal noise that for the briefest of moments makes one think, "oh gosh, now they're turning into Esoteric!" before a theme that mirrors the song's beginning creeps in at a snail's pace and repeating dirge-like before fading into oblivion.

The following tracks continue in the slower formula, albeit with shorter rocking sections thrown in sporadically. "Fucking Wizard" seems to be Reverend Bizarre's take on "Black Sabbath" (the song, of course) with the mood altered somewhat by lusty, silly lyrics. It works, though, because although it's clear that the Reverend has a sense of humour it's handled in such a way that it doesn't seem to come off as being forced or damage the atmosphere of otherwise serious music.

There's a lot to be said about Reverend Bizarre's formula, and certainly they aren't the most original band out there, but they combine styles in such an artful and balanced way that it all seems to fit together beautifully. I do sometimes wish that the solos were better, as they sound a bit flat and uninspired at times, as if Peter isn't quite sure what notes to play and hasn't totally mastered this improvisation thing yet. I also think it would have made more sense to space the first three songs more evenly throughout the album as they are definitely more upbeat than the remainder of the material here. However, these are minor gripes, for the songwriting, the sound, the cavernous drum attack (Earl of Void has got to be the best drummer in all of doom at the moment) and that sick, distorted bass sound move me like few other bands can, and even though it's always very easy to spot other influences in Reverend Bizarre's music, they create with such sincerity that what we get is an honest homage rather than a saccharine rip-off. I can't stop listening to this one, and more than anything else I think that is a testament to its strength--you *will* come back to it, time and again. (Jean-Marcel Casey, DiabolicalConquest.com)