The Album Of The Day is "Rampton" by Teeth Of Lions Rule The Divine. 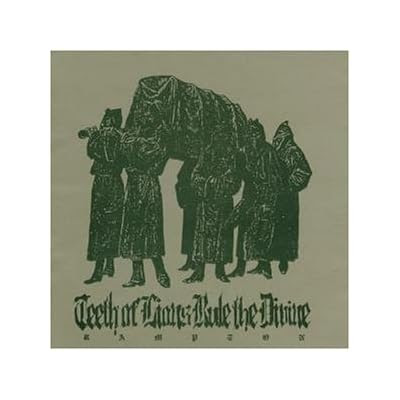 Sometimes an album comes along that's so deranged and far gone, it invokes naught but stunned looks of disbelief (often accompanied by uncontrollable drooling) from the listener. Surpassing that is Teeth of Lions Rule the Divine's Rampton, an exercise in doom-noise absurdity that craps black sludge on any and all musical conventions in its path, causing one to chuckle at Napalm Death, who at one time had the tenacity to tout itself as the end of music as we know it. Uh huh. It sort of makes sense that TOLRTD is a doom metal supergroup, consisting of drummer Justin Greaves (Iron Monkey), vocalist Lee Dorrian (Cathedral, Napalm Death), guitarist Stephen O'Malley (Khanate, Sunn O))), Burning Witch) and guitarist/Southern Lord leader Greg Anderson (Sunn O))), Goatsnake) — although Rampton is, by design, truly shatterpated, the enemy of all things logical, and most likely the product of excessive ingestion of chemical depressants. Take opening cut "He Who Accepts All That Is Offered (Feel Bad Hit of the Winter)" as a prime example: A quasi-response to Queens of the Stone Age's smugly ironic single "Feel Good Hit of the Summer," the 29-minute track is an endless slog through countless filthy snowdrifts of ambient noise, feedback, and sluggish drumming, Dorrian's goofy, monotonous vocal droning on about (presumably) a particularly bad acid trip, if you care to squint at the lyric sheet, which is printed in a nearly indecipherable font. "New Pants and Shirt" and "The Smiler" continue the album's lead-footed trudge through a polluted haze of billowing smog and soot, sounding like a hellish mixture of Sunn O))) or Earth-style ambient noise dementia and Sleep's one-sloppy-riff-will-do-for-the-next-eight-minutes non-work ethic — kind of like dragging Cathedral or Eyehategod across the turntable at about 11 rpm. And that's it — three songs, 55 minutes, and countless glazed-over eyeballs rolling back into heads. Only Sleep's 52-minute, one-song, one-riff excursion Jerusalem rivals Rampton in sheer ludicrousness. Maybe the members of TOLRTD were really staring into the blackened pits of hell as they passed this black-tarred beast into the night, or perhaps they were snickering while constructing such epic, grotesque excursions into lunacy — either way, their intentions were undoubtedly foul and insidious. For appreciators of mentally unhinged anti-music only, and, uh, handle with care. (John Serba, All Music Guide)