The Album Of The Day is "Total Universe Man" by Valient Thorr. 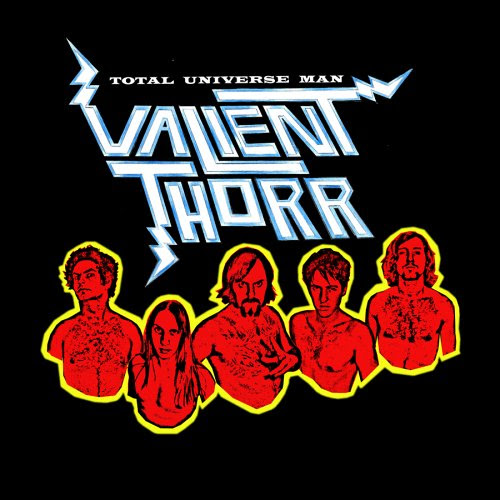 Being that it's almost impossible to inject fresh perspective and excitement into authentic, classicist hard rock without turning it into something other than classicist hard rock, the wacky outer space mythology concocted by North Carolinians Valient Thorr unexpectedly becomes a welcome additional benefit for their music -- never mind an obvious distinguishing gimmick. Especially since, for all its good-humored absurdity, in the end the band's assertions of hailing from the planet Venus still take a back seat to the inspired songwriting of their freshman outing, Total Universe Man, which is fueled by an electrifying mixture of hard rock and metal. More specifically, it's the head-on collision between charismatic singer Valient Himself -- with his larger-than-life, wild man preacher persona -- and the Marshall stack-melting power chords, searing dual harmonies, and scalding-hot leads traded by guitarists Jjin and Eidan Thorr, that ignite the brightest sparks in shit-hot tracks like "Showdown," "Palm Dealer" and "Blow Up the Pyramid." Also worthy of praise are the opening prologue, which sees Valient Himself exhorting "true believers" into action, MC5-style; "Man Behind the Curtain," with its memorable breakdown section and that lick copped from Metallica's "Hit the Lights"; and, arguably, the album's best track, "I Am the Law," which follows an intermission marked by Beefheart-esque poetry with an absolutely devastating band performance, a drum solo, and a turnaround riff of monstrously groovy proportions. In short, Total Universe Man is a total album experience, filled with adrenalin-pumping intensity, borderline loss-of-control, a little lunacy, and, perhaps most compelling, the chutzpah to make everything Valient Thorr does sound arena-sized, regardless of their club-based existence when they recorded it. (Eduardo Rivadavia, AMG)