The Album Of The Day is "Ample Fire Within" by Ascend.

ASCEND is a new collaborative musical project between Gentry Densley (Iceburn, Eagle Twin) and Greg Anderson (sunn 0))), Goatsnake, Engine Kid). Both have been making music that has crossed paths several times in the last 19 years.(!!!) The most notable being during the 90s when Andersons’ band Engine Kid toured with and shared a split album with Densleys’ band Iceburn. During that time both were heavily experimenting with the fusion of jazz (Mahavishnu Orchestra, Miles Davis, John Coltrane) and the dark behemoth tones of influences such as The Melvins, Gore, Slint, Caspar Brotzman.

ASCEND re-visits some of the tones, and moods of their past works as well as traveling into uncharted territory all done with the utmost focus on heaviness and power. Of particular note is the vocal performance by Gentry Densley. His voice is deep and ominous with a subtle Tom Waits influence within the growls and gruffness that is emoted. Anderson gushes enthusiastically: "we were extremely fortunate to have ALOT of help from our friends with this recording. Andy Patterson pounded the hell out of the drums, and Steve Moore (aka Stebmo, also in Earth and often times : sunn 0))) ) added some trombone (Obelisk of Kolob, + Dark Matter), organ (Her Horse Is Thunder, Dark Matter) and some amazing wurlitzer (Amplifier Within, Divine). His playing brings a dark, sophisticated jazz atmosphere to the album. On the track "V O G" we were blessed to have Bubba Dupree (Void) AND none other than Kim Thayil (Soundgarden) put down some incredible lead work! The entire album was mixed by Randall Dunn (Earth, sunn 0))), Kinski) and mastered by Mell Dettmer who is turning into the "house-mastering wizardress" for the Southern Lord label. 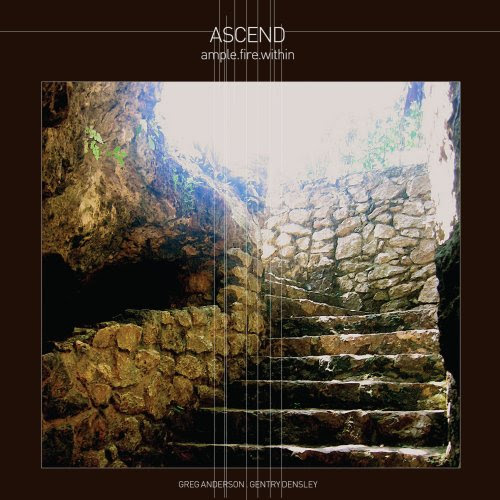 "Remember that bad dream you had as a kid? The one where you were in the darkest of evil forests and you just knew something awful was chasing you, something evil, and something you couldn’t see? Imagine now that same dream being brought to life sonically through music and you will have “Ample.Fire.Within” an incredibly destructive and impressive release from Ascend, a band that features Gentry Densley (Iceburn, Eagle Twin) and Greg Anderson (Sunn 0)))), Goatsnake, Engine Kid). This is what ugly music should sound like; this is on par with the band Corrupted as far the next evolutionary step of doom. This isn’t just some slow sludgy hoshposh of Sabbath riffs on quarter speed, nor is it some lazy attempt to slow down trash riffage. This is a beast, a monolith of sound and creativity that calls upon the dark specters of doom and forces them to slap out with the Tom Waits, Jazz and melodic guitar tones.

Let me put this into perspective for you, the opening track “The Obelisk Of Kolob” is four minutes and twenty five seconds long. The first two minutes are just feedback and when the song kicks in it isn’t huge, it just comes in, very dark and very sly. This entire album is about mood, tension and taking the listener to a dark place. I’m not fully sure if Ascend even meant to make an album in the most conventional sense. It seems more like a connected series of dissonant thoughts that both men pushed forth into this recording.

Track 2, the title track, is simply the constant strum of a guitar with Densley’s gripping vocals layered over it. Behind the song is moaning trombone and other ungodly sounds that lull you into a near trance as the fingers of the song work their way over your throat. There is a growing vibe in heavy music that has more to do with making an album an experience as opposed to just a selection of songs. Corrupted, Sigh, Cursed, Made Out Of Babies, and others are joined by Ascend in believing that the listener is a little more forward thinking than most and that they can handle moving beyond what they already know. It’s not for everybody but for those of us who operate as though music was a religion, it is definitely for us.

My favorite track on the album is the ten-minute plus “VOD” which is just all out scary. Between the march-like percussion, the droning guitars and vocals that sound like the tortured confession of a dying psychopath you can’t help but feel chills as this song progresses. One element that adds to this tune is the addition of Bubba Dupree the guitarist for one of my favorite hardcore bands of all time Void. Void were eons beyond what normal hardcore was doing in the early eighties much like this album is eons beyond what normal heavy music is currently spewing out.
I think a great description of this album would be elemental. Ascend have made a record that is more a force of a nature than a gathering of musical sounds. Sure it’s heavy, sure it’s got doom ideas in it, sure this is a dark record but its not just metal, nor doom nor anything that can be placed into a small box and easily interpreted. I suggest copious amounts of weed for this album and a long trip to a shadowy forest. If you can’t do that then sit in your room with candles and no other light. This is not an Ipod record because it’s not a record; it’s the realization of a dark experience through two men who have been playing with the parameters of music since day one" (Iann Robinson, Nonelouder.com)