THE SWORD SLAY EUROPE, COME BACK TO U.S. IN SUPPORT OF "GODS OF THE EARTH" 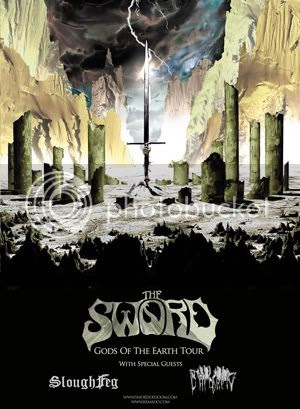 Aside from SXSW and a lone date February 28th at the Clearchannel Metroplex Event Center in Little Rock, AR, the U.S shores won't see The Sword until early April, back from their whirlwind tour with Saviours and Black Cobra in the UK. U.S. April dates, with Children and Slough Feg also on the bill, are below!

Oh, and they're capping it off with a little festival in Manchester, Tennessee you may have heard of called Bonnaroo. Tickets go on sale this Saturday for the June 12 - 25 event.
RegR at 6:19:00 PM
Share