Today, we are honored to present an exclusive stream of the song "Atrophic" from the upcoming release from HORNSS. Prepare your ears for a short and powerful stab of fuzz-drenched doom with a raw punk attitude. This song absolutely slays, so crank it up and throw them "HORNSS" in the air! 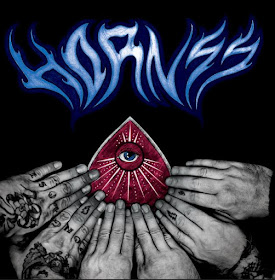 HORNSS have gained a worldwide reputation among the stoner rock and doom scene, taking the stage with fellow heavy hitters such as Ufomammut

Formed in 2010, the band includes Mike Moracha and Nick Nava, who originally got their start in the early Palm Desert music scene that spawned the desert rock movement, as part of the band Solarfeast (with Chris Cockrell, formerly of Kyuss) and Jack Saints, along with drummer Bil Bowman (formerly of Zodiac Killers, pioneering Bay Area black metal band blackQueen and Florida sludge heavyweights Scrog).

Telepath is the follow-up to the band’s acclaimed debut album, No Blood, No Sympathy, released in 2013 on Riding Easy Records. Recorded by Tim Green (Saviours, Melvins, KARP, Comets on Fire, Hot Lunch), the guys recorded this one directly to analog tape at Green’s Louder Studios in Grass Valley, CA. The new album will be released on limited vinyl by STB Records and compact disc and digital worldwide by Ripple Music.