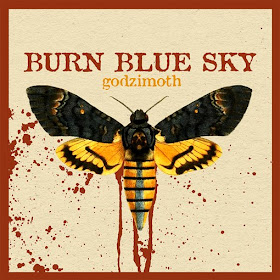 Band Name: Burn Blue Sky
Genre: Heavy Rock
Location: Akron Ohio
Brief Bio/Description:
Burn Blue Sky is set to release their new EP on MAY 13TH 2016 through iTunes, Amazon, and CDBABY. “Godzimoth” is the third release from the northeast Ohio metal quintet, who have been performing and recording nationally since 2000.

Recorded at Tangerine Studios in Akron, Ohio, “Godzimoth” is the first BBS recording to feature vocalist/frontman Jeff Fahl as a full-time member of BBS. The EP comes off the heels of the band’s second album, “Celebrate the Decline,” which garnered praise from various publications, including Heavy Planet, DangerDog Music Reviews, Metal Bite, and others.

, Black Sabbath as influences, but the band is firmly seeded by blues and southern rock roots as well. The massive wall of sound and sheer weight of the de-tuned guitar riffs puts BBS in lock-step with both current and past masters of metal.