Turn up the stereo, turn down the lights and twist up a hog leg.  These three dudes from Santa Cruz, CA are putting out the prescription and you don’t even need a medicinal card.  This is a band you have to hear.
Where to begin with this amazing debut?  Remember watching skateboard videos backintheday and hearing a song you liked so much that you would pause the credits to find out who it was?  Mountain Tamer reminds me of that.  The perfect balance of heavy psych with a punk attitude and a perfect tone that brings it all together into a sound that is truly unique to them.  They are not easily comparable to anyone, it is all their own and for a first album they have already done something many more established bands are still trying to figure out.


But don’t think this is all just juicy riffs and jutted jaws, there is really solid musicianship throughout.  Dave Teget’s bass work ranges from the classic driving thump of the opening track Mind Burner and the third song Dunes of the Mind to the mellow, undulating hypnotism of Satans Waitin.  The drum work by Casey Garcia shows serious chops.  He goes from working expertly in the pocket in Wolf and Mind Burner to forcefully turning the drums into the lead in Vixen and Sum Peeps.  As for Andru Hall on guitar, he gives you a taste of everything from the desert inspired glory of Mind Burner to the utter space mayhem of Dunes of the Mind  and Pharosite to the classic blues styling in Wolf.  He does all this while working the microphone with the style of a man who just walked out of his last day at the job he hates giving the boss the elusive double handed, one finger salute. 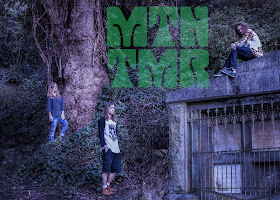 The overall production is rock solid making this an excellent choice for your headphone listening pleasure or blasting on the stereo.  Anyone looking for tracks for a new snowboard or skate video, look no further, you found what you are looking for right here.  For the rest of us, we just found ourselves a great new band that is putting down some seriously kickass rock and roll.
Facebook|Bandcamp

Album Review: 'Rise of the Dawncrusher' by Slabdragger 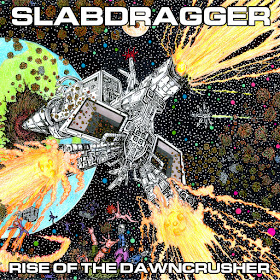 Either by design or one hell of a stroke of nominative determinism, the London-based 3-piece that are Slabdragger sound every bit of how their name suggests. This is music to move Stonehenge to... But this will not be news to fans of the band's previous album ‘Regress', but rather will cause rabid salivation at the knowledge that 'Rise of the Dawncrusher' - the bands latest full length on Holy Roar Records - is out now.

On a cosmic trip of sludgy-doom, with black metallic shimmers and a punk-like delivery, this pony has many tricks. And the hour-long 5 track record is packed-full of ideas. What excites me about Slabdragger with this record is that it's never formulaic, and as a listener you don't feel there's a roadmap for where they're taking you. 'Progressive' may be seen as a dirty word by some, but this album's inventiveness demands further listens which uncovers elements you don't pick up on first time round.

Opener 'Mercenary Blues' lures you in with a Sabbath-esque groove, before heavy section preceding heavier section... It's a challenge to keep anyone engaged across 12 minutes in today's click-happy world, but this is master craftsmen at work. The other standout track is the brooding ‘Dawncrusher Rising’, which over 15 minutes builds and soars like the awakening of a behemoth from the deepest darkest depths of hell.

It seems the five years plotting their follow up to ‘Regress' has served Slabdragger well. Here's hoping the response to this album will get the band back in the studio a little faster next time round...

We hope you are as serious about your band as we are, because we are about to do something unprecedented. Our goal since our inception was to get the word out about bands from around the world that otherwise may have never gotten heard. We have helped many bands in our 8-plus years of existence get noticed by labels, sell more merchandise and gain a growing fan base. Our new band submission page will be changing format. We will feature every, yes I said every band that submits to us as long as the form is filled out completely and professionally. One thing to understand however, is that not every band submitted will be reviewed. Our review process will still remain the same. This new form will be available on April 1 (no this is not an April Fool's joke) Let's say you submit on April 1, your band will be featured on April 2, that is unless there are 5 or more submissions on any given day. We will only feature a limit of 5 bands per day. In that case the bands will roll over to get queued up to the next day. The initial post will be on our main page and will then be archived on a dedicated page called HEADBUZZ. We are sorry, but if you have recently submitted your band, you will have to re-submit using the new form to get featured. We hope you are excited about this and hope we can rattle the skulls of more music fans around the world.

Coming this week will be an opportunity to pre-order a 7" vinyl split between veteran heavy rock bands Desert Storm and Suns of Thunder.

To warm up for it, here is a gateway to the archives of each band, an excursion well worth a commitment, and never before featured on Heavy Planet.


If you are not yet familiar with either band, you should find that you can enjoy their decibel busting, high wattage music from past releases. Once you've laid your dark, demented minds to waste from the blitzkrieg onslaught of ethereal musical mayhem you might find you are primed for the forthcoming vinyl offering.

DESERT STORM
Desert Storm is a stoner rock, doom rock veteran hailing from the UK. They have an archive of magnificently crafted albums stretching  back to 2008, each chock full of high voltage, low tuned awesomeness. They have been featured quite a number of times at Heavy Planet:

The gravel voiced frontman Matt Ryan is the epitome of the stoner/doom rock genre, deftly delivering haymaker vocals that match the darkly laden depths of bassman Chris Benoist's thunderous thumping, the supreme riffage and scorching solos of guitarists Chris White and Ryan Cole, as well as the driving dementia of drummer Elliot Cole.

The split features the new song "Signals From Beyond" which is a melodious romp of delightfully amplified distortion, booming and crackling with resonance and grace.

SUNS OF THUNDER
Suns of Thunder are not only prolific, dropping electric energy filled rock and romp dating back to the turn of the century, but are legendary in their home country of Wales. Suns of Thunder were part of a feature on Heavy Planet in which the live event, Swamp Feast, featuring Suns of Thunder, their split partners Desert Storm, as well as The Witches Drum, was caught live by Heavy Planet:

High energy, explosive, adroit riffs from dual guitarists Greg Brombroffe and Matt Williams are matched with equal power, intensity, and proficiency by the same pair on their complementary vocals. The rumble and thunder of bassist Chris James propels the music forward with a voracious capacity while the high energy mojo of the music is laid out first and foremost by the virtuoso stickwork of drummer Sam Loring.

The newly crafted song "Earn Your Stripes" delivers another example of the deftly orchestrated melodies of power riffs and raunchy fun to the split with their fellow stoner rock countrymen.

These two massive representatives of rock in the twenty-first century have teamed up to release a high quality contribution of heavy low tuned sublimity this coming April. Pre-sales begin on March 29, in which you can order your vinyl copy here: 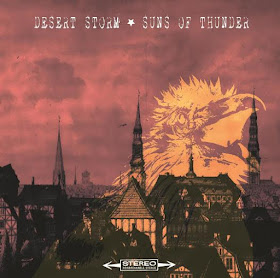 
I tasted the "Pudding" a year or so ago and after listening to " Taste the pudding" habitually I started wearing panties to hopefully throw at them if I was lucky enough to see them live. Still hasn't happened, but boy howdy did they just up the panty ante by bringing in the supreme vocals of Uta Plotkin (Witch Mountain). She belts out both of these tracks in BWP fashion but with a serpentine witch tongue fit for a Boris painting and somehow making me a man through this strange musical magic. There's plenty of killer riffage and sexy lead guitars to keep any fans of the doom/stoner genre happy. So buy this album and the other 2 releases then put on your favorite cloak, load up and toke. 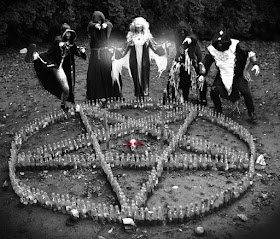 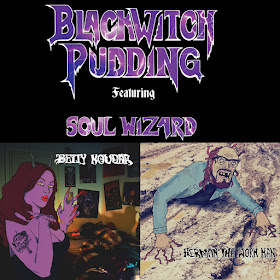 I stumbled across this beauty just cruising through bandcamp.com. It slams your head into a heavy stoner wall from the first lick of the opening riff and never lets up. Cleverly crafted and passionately executed this song is the only one released for digital consumption by Grimoire Records. Pre-orders for the vinyl LP are available, however. If this song is any indication the LP should be a treasure trove of joyous jams.

I was going through our submissions and seen that this had somehow not been snagged up for review. So I jumped on it recalling having heard their first release "Theia" last year and found myself nodding my head to the riffs in agreeing fashion.

The self titled release due out on Magnetic Eye Records in April (pre-order now) is everything I love about a band and then some, from Doom to Stoner, Psychedelic and more and carries you seamlessly for around 40 minutes.

I find the vocals a nice breath of fresh air and my ear holes welcome the foreplay of clean singing before any onslaught of sonic heaviness. The riffs when not sitting back to compliment the song are heavy and fuzzy like your tongue after about 3 sweet tokes with some nice effects thrown in to keep you in the wo trippy mode.

The 1st track-Spore instantly sets the tone and carries the listener right through all 8 tracks, I really like the acoustic track sitting in on # 4 and if you go to their Facebook page there's a little video snippet of them recording this.
Every once in awhile you get lucky when you put on an album and I'm instantly sold on this, if it was the end of the year this would be on my top 10 list for 2016 releases.

New Band To Burn One To: Stonerror

Sometimes a tune hits you at the right place, right time.  I was in that neighborhood when I put on the new EP from the Kraków, Poland four piece Stonerror called Rattlesnake Moan.  The title track is a glorious blend of space fuzz guitar overlaid atop of a hypnotic bassline that couples perfectly with the tribal drum work and hissing vocals.  The first track on the EP, Jericho, is a seven minute journey of dynamics and emotion.  Glad I was cruising by, this band made my day.

Stonerror describe themselves as a psychedelic stonerpunk band and that fits better than anything I could write.  Picture a Minor Threat-era Ian MacKaye fronting a band that somehow combines My Sleeping Karma with Sir Lord Baltimore.

It is an excellent debut and something different that you really must check out.