The first great album of 2016 dropped on bandcamp shortly before Old Man 2015 changed Baby 2016's diaper, as it seems to happen quite frequently every year....the dropping of albums around Christmastime, not the baby body function maintenance.

Hailing from the great city of Los Angeles, California, Salem's Bend's self titled debut of 7 unique tracks is a breath of unique air to the underground stoner retro desert sound as these rockers have crafted some fine melodies around which they've wrapped gifted displays of musical execution in a fuzzy, heavy, crunchy, funky vein. The influences for these rockers are many and true as the low, heavy blues rock that soars down a retro desert highway in the doom of dusk exhilirates with their uncommon, singular sound.

Salem's Bend have stuffed some exquisite recordings in this initial rock offering. Each time I listen through it I find a new appreciation for the craft and style they've developed from their own experiences with rock giants of past and present, having absorbed the sounds from hours of listening to albums of the greats such as Zeppelin and Sabbath, as well as from recent behemoths like Kadavar

. They have forged their own searing, raucous guitars, intense, deep bass, and athletic, punctuated stickwork around some of the most intelligently interesting melodies to float through the stonersphere in quite some time. It's a perfect blend of past, present, talent, and heart.

The album kicks off with a timeless pounder in "Balshazzar", a searing, primal scream of rhythmic delight. There are doomy delights such as "Queen of the Desert" and "A Tip of Salem", and the album practically soars with the lyrically exquisite "Losing Sleep" as well as with the pulse pounding "Mammoth Caravan".

This album is timeless, ageless, and a perfect start to 2016. At present we look forward to what the year will bring in the form of spiritual musical deliverance. I daresay that in 12 short months when we reflect on what we enjoyed of 2016, we'll be speaking once again of "Salem's Bend" 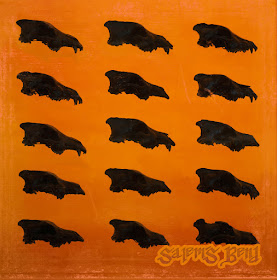