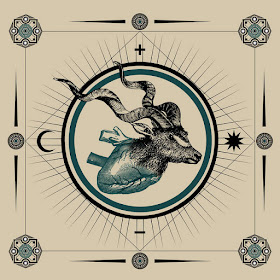 Covered with bruises must be the arms of the quintet that make up OHHMS, from continuous pinching injuries sustained during their first 12 months of existence. All part of the plan, no doubt. Having been picked up by Holy Roar Records after hearing their demo, to releasing their debut EP ‘Bloom’ in 2014, festival appearances at Temples, Arc Tan Gent, Fear and Hevy, plus shows with Conan, Earthmass and Slabdragger, they’ve also found time to record their follow-up EP ‘Cold’.

Describing themselves as "Progressive. Doom. Slow. Noise. Animal. Rights.” ‘Cold’ delivers two meandering beast-like tracks of heavy progressive doom over 30-odd minutes. First up is ‘The Anchor’, which highlights the band’s boundless creativity, opening with a slow atmospheric intro with bold work from vocalist Paul Waller, to an expansive heavy middle section with guitars and drums in unison, through to a fuzzed-out closing in homage to 70’s psychedelia. ‘You can’t sink us’ is the roar, and on this evidence I’m not one to argue.

Right... onto track 2. ‘Dawn of the Swarm’ picks up from where ‘The Anchor’ ends. From a dream-like Pink Floydian intro, the track builds to an instrumented assault of riffs and vocals, to suddenly disperse leaving you feeling like you’ve been pushed off a cliff... Only to feel saved, bashed about a bit and redeemed before the track ends. Once again OHHMS are bending conventions with their prog-like mentality packaged in a shiny doom wrapper.

‘Cold' is like a sonic wormhole, you never know where you're going to arrive at next. And that's what’s captivating. OHHMS are on a mission to expand your mind and keep you guessing every step of the way. And their song-craft and creativity will ensure they continue to carve their own path, and separate themselves from their often one-dimensional peers.


Check out ‘Cold’ below: