New Band To Burn One To: DOPEGOAT 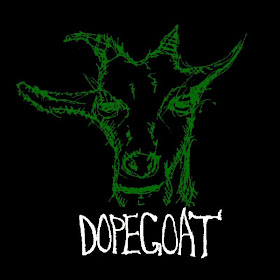 Hold thy preconceptions at the door, DOPEGOAT are not as you may think. Most acts associated with ‘Dope’ tend to play swamp heavy sludge with songs based solely around reefer and drinking, but not this Atalanta, Georgia, four-piece who offer something completely different.

Having just released their debut self-titled EP (available for free), the band, made up of Adam Clarke, Sam Bielski, Matthew Klem and William Walker, are dipping their toes into a sonic ocean that not many others are trying at the moment, and it’s a bravery that pays off and has to be admired as the EP delivers waves of thought-provoking musical exchanges.

There’s such a varied mix of styles going on here it’s hard to keep up with the influx of groove metal, jazz, stoner, doom-laden, goth-like grunge, psychedelic tendencies that these four fine young gentlemen throw into the mix, constantly leaving you guessing as to which way the wind will take them next. If you single out the track ‘Troll Hunter’, a 10-minute epic journey showcasing the last 50 years of rock music, with grave deep doom, covered under a mist of stoner riffs, all following on from a finger clicking groovy jazz bass line that at first seems to have no right being there, it showcases everything the band is trying to do. Even when the band are doing something completely different, their influences can flow heavily as seen on ‘North Pond Hermit’ which echoes  Melvins-like madness.

Make sure you check out DOPEGOAT before their debut full-length implodes the band through one giant headfuck.