Sunday Sludge: Primitive Man - "Home Is Where The Hatred Is" 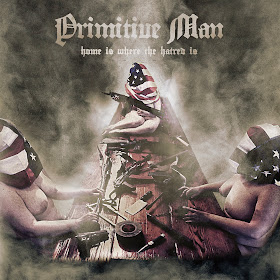 Much of the so-labeled doom we chew on is swollen with the promise of pain, an ominous descent into... well, something. Bands can reach the pit and the wolf at the door, as promised, busts through. Others present a threat and rely solely on those shadowy unknowns. I guess those sounds have their place. But sometimes, I just want a band to get to the fucking point.

By now we know Denver's Primitive Man to fall into neither camp. Since the trio's 2013 introduction of the brutal, excellent Scorn, they've set their own standard of blatant bludgeoning. Through various splits over the past two years, Primitive Man have all-at-once announced their presence, delivered their rust-fisted blows, and asserted their dominance by keeping a heel to our throats. Here, with the four tracks of Home Is Where The Hatred Is, they show no sign of relent.

The EP's half-hour of screeches and hovering spite begins with Loathe, tormenting behind sustained malevolence. Ethan McCarthy still gives zero fucks who may be in his way, and Spy's encircling drum work may as well be a hostile Korowai tribe for all the anxiety it catalyzes. This blackened sludge buries us so low that it's near-impossible to sense even a sliver of hope. The cavernous, all-encompassing infliction is parted by an icy wind that carries answers further out of our reach. And as doom timbers collapse in slow-motion, the jagged squalls only augment our misery.

Downfall finds a quick groove and laughs at restraints, later shifting blackened pitches but never escaping the mire. As McCarthy chokes out brutal truths, the supporting tapestry remains wholly caustic. Tone and mood are exceedingly bleak here, but isn't that consistent with PM's catalog? Over and over, we're dragged into a horrifying meld of loose dirt, hot tar, and spiking licks piercing the sludge glaze. It's a filthy, anguished roll in the hay. If hay were fucking razor wire.

In keeping with themes of doling calculated evil, the EP's closing tandem fails to let down. Double kicks head a charge on Bag Man, rolling into itself amid a cloud of soot. The steady escalation of ire is staggering, even for these guys. And when the tracks shift to introduce the closing A Marriage with Nothingness, we're simply ill-prepared. Pain and discord are reflected in a swirling, scraping, trippy mindfuck. As static gradually hazes, everything about this release grows more terrifying.

Buzzing throughout with equal parts callous disregard and deafening feedback, Home Is Where The Hatred Is marks another triumphant blow to our perceptions of the human condition. Ugly truths are never easy to swallow, and here there's no safe alternative. Primitive Man have snatched the torch and thrust it into our gleaming smiles. So what's it really sound like? I'd imagine slowly dying alone would look, feel, and sound something like this.