EP Review: 'A Penchant for Hell on Earth' by John Lancaster 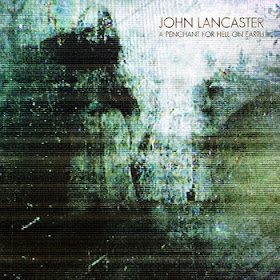 Is there such a thing as intuition or are such occurrences simply a matter of coincidence?  John Lancaster’s latest solo offering, A Penchant for Hell on Earth had me pondering this conundrum upon receiving the EP in the mail a few days ago.  You see, just recently I had the urge to resurrect my “Flashback Friday” column where I highlight a band from yesteryear, and my inspiration for doing so was none other than Lancaster’s former band Chum.  So there I was rummaging through my music collection in search of Chum’s tragically underrated (or perhaps I should say unnoticed), 1996 debut album Dead to the World, having no idea that the band’s singer would be sending me a copy of his latest solo record within a matter of days.  Now that’s either some really spooky shit or its one hell of a coincidence.  Whichever it may be…cosmic, musical connection or just a simple concurrence of events…I’m excited to be sharing new material from John Lancaster in place of that previously planned nostalgia piece.  I think you’re gonna dig it.

Now there's a good chance that you've never heard of Chum, so to give you a little background, they were an early 90's West Virginia outfit that played down tuned, heavy grooves with a melodic, soulful croon (courtesy of Lancaster of course) laid right over the top.  To give you a musical mile marker of where they were coming from, I've often thought that Lo Pan must be big Chum fans.  On this solo effort, Lancaster doesn't stray too far from that same formula, layering massive guitars amidst an atmospheric backdrop, which can be heard immediately on the EP’s intro track wherein the singer lays the groundwork for a theme that carries throughout these six songs…“it’s a labor of love for someone."

Fellow guitarist Mac Walker, also formerly of Chum, joins Lancaster on the galloping “Long Gone,” which is the first real example of the sonic landscape you’ll be traversing here with its bouncing rhythm, Patton-esque vocals, and haunting reminder that “before you know it, this life is long gone…forgotten.”  But it’s “Jerusalem Syndrome” where Lancaster and his supporting cast, rounded out by bassist Barry Smith and drummer Josh Adkins, marry their militaristic precision (think Godflesh) with utterly soulful vocal work (King’s X is an obvious influence) and showcase their bowel rumbling, yet remarkably melodic heaviness.

“Penny Drops” features a bouncing groove that flows into an ethereal, spacey chorus and culminates with an intense breakdown that’ll have your head bouncing like its 1996.  And “Water Under the Burning Bridge” takes the momentum and runs with it, opening with palm muted, staccato guitar riffs and then building towards one of Lancaster’s more aggressive vocal outbursts to be heard on this collection.  The EP’s coda is a companion piece to its intro track, appropriately titled “A Penchant for Hell on Earth Pt. 2” and essentially combines every element described previously into a cohesive closer that features multiple time signatures while driving home what I believe to be the running theme of this EP, which is the fleetingness of time…“cut along the line, it’s all the same…bury it alive, it’s all the same.”  Nearly 20 years after the release of Chum’s Dead to the World, John Lancaster continues to create music that is devastatingly heavy in both sound and emotion and that’s no coincidence my friends.  You need to check this out.